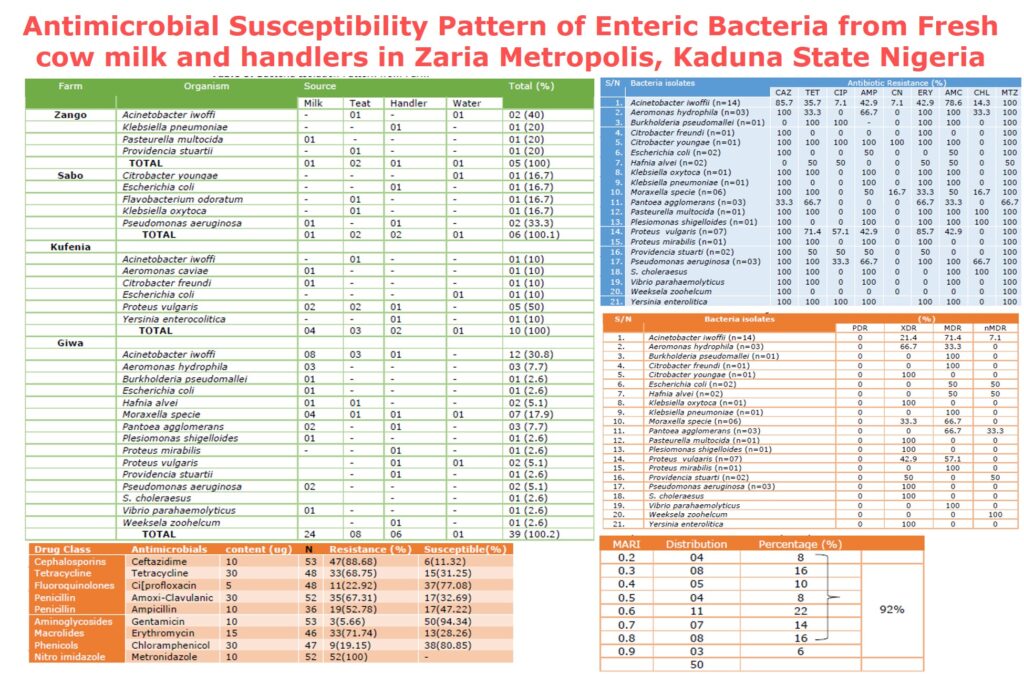 A bacteriological examination of raw cow milk for the isolation of enteric based bacteria was conducted on milking cows and their handlers from selected farms in four Local Governments in Zaria, Kaduna State. The aim of the study was to check the quality of the raw cow’s milk and also verify the rate of contaminations of the raw cow’s milk from external sources which are regarded as environmental pathogens during and after milking processes. A total of 105 samples; 42 raw milks from lactating cows, 42 swabs from cow teat, 16 swabs from herd handlers and 5 samples from water used in the cleaning process were obtained. The raw milk samples were screened using a Methylene dye reagent to check its microbial load before analysis began, the total bacteria count (TBC) and total coliform count (TCC) were analyzed using the standard cultural methods. The isolates were identified using the standard biochemical procedure and Microgen TM System (GN-ID A+B Kit). Results revealed that one hundred and two (102) bacteria consisting of Seventy-six (76) Polymicrobial and twenty-six (26) single cultures were recovered as positive culture while three (3) had no growth. The mean TBC and TCC of raw milk observed in this study were 2.56 ± 0.40 x104cfu/ml and 1.06 ± 0.16 x104cfu/ml respectively. Acinetobacter iwoffi and other members of Enterobacteriaceae isolates were resistant to tetracycline (68.75%), erythromycin (71.74%) and metronidazole (100%), while high susceptibility was observed to gentamicin (94.34%) and chloramphenicol (80.85%). High bacterial contaminations including Multidrug-resistant bacteria were observed in this study, contaminations were majorly from improper pre and post dipping processes and the use of non-portable water.

Milk is an aqueous colloidal suspension of protein, fats, carbohydrates and it contains numerous vitamins and minerals [1]. Raw milk is milk from any animal that has not been pasteurized or homogenized [2]. Raw milk essentially comes from a sterile environment within the animal, the risk of contamination begins within the udder, skin, faeces, milking equipment, handling and storage [3,4]. Improper cleaning and sanitizing of the cow’s udder is one of the major sources of high-level bacteria count in raw milk. In a study conducted in Santa Catarina, it was reported that the udder cleaning process was performed incorrectly, reinforcing the need for offering continuous training focused on showing dairy farmers how important is to sanitize the udders of the cows in order to have raw milk with low bacterial count [5]. The high amounts of bacteria found in refrigerated raw milk can be explained by the fact that in small farms there are several hygiene problems occurring during milking and raw milk storing processes [6,7].

Coliform bacteria are normal inhabitants of soil, digestive tract and manure and they accumulate and multiply in contaminated bedding. Detection of coliforms plays an important role in the dairy industry because coliforms are frequently used as hygiene indicators and there are clear regulatory limits for the presence of coliforms in finished dairy products. For example, the US Pasteurized Milk Ordinance limits the number of coliforms in pasteurized grade “A” milk to ≤10 CFU/ mL [8]. Coliform numbers of 1,000,000 or more per gram of bedding increase the likelihood of an udder infection and clinical mastitis [9]. Mastitis caused by coliform is a cause of concern, the infection is usually confined to one or two-quarters of the udder and the infection occurs very fast. Cows may appear healthy during a milking process and they could be sick during the next milking session. The raw milk from the sick cow usually appears watery or yellowish and contain flakes or clots. Escherichia coli, a major inhabitant of the intestines of all animals is mostly associated with coliform mastitis, when this enteric organism is allowed to spread unchecked because of unhygienic practices during the milking process and dirty environmental factors, these could lead to serious problems and threats to the dairy chain [10].

The presence of coliform organisms in milk has been linked to a wide variety of human infections such as endocarditis, urinary and genital tract infections, meningitis and septicemia [11.] In this regard, similar studies related to ensuring raw milk safety need to be carried out in order to provide reliable information which can improve the quality of milk.

2.1 Study design
A cross-sectional study was carried out on raw cow milk supplied to the community for consumption and/or processing into other milk products. The study aimed at monitoring the rate of contamination of the raw milk samples, therefore, swab samples were taken from the cow teat and the handlers as well as some quantity of water used in the cleaning process on the farm. A total of 105 samples were collected for this study (Table 1). The selection of farms was based on; different management conditions, the willingness of the farmers/pastoralists to participate in the study, and accessibility of the location, so that samples collected could be immediately transferred to the laboratory for further analysis.

2.2 Sample collection
Sampling was performed according to the International Dairy Federation guidelines [12]. Individual cows were properly restrained and the teats were washed and disinfected using a disposable paper towel immersed in a pre-dip iodine solution; in a concentration of one in ten milliliters (1:10) of iodine and water. This process of pre-dipping was performed by the herd handlers and then a sterile swab stick was used to clean the udder. The first stream of milk was allowed to run off, thereafter, sample of raw milk was collected in sterile universal bottles and sealed air tight. Containers were marked with source of sample, the date and time of sampling and other relevant information. Also, sterile swab sticks were used to take samples from the handler and sample of the water used on the farm for cleaning were taken. After collection, the samples of raw milk were carried in ice box maintaining at a temperature of 4 – 50 C and brought to the laboratory, preserved in refrigerators within 1 hour until analysis begin.

2.3 Media Preparation
All glassware including petri dishes, test tubes and pipettes used in this analysis were sterilized using a hot oven at 180 ± 50C for at least 1 hour. Each bacteriological medium was prepared from commercially available powder according to the Manufacturer’s instructions and sterilized by autoclaving at 121°C for 15 minutes.

2.4 Isolation and Identification
Tenfold serial dilutions of samples of raw cow milk were carried out in peptone water, then one hundred microliter (0.1 ml) of 1:103 and 1:104 dilutions were plated out using surface plating technique on Nutrient Agar (NA) for total aerobic bacteria count (TBC) and MacConkey agar (MAC) for total coliform count (TCC) present in the raw milk sample. The inoculated plates were then inverted and incubated at 37°C for 24 hours. Thereafter, the plates were screened for the presence of discrete colonies and for each dilution, visible colonies that appeared were counted and the average were estimated as colony forming unit in per ml (cfu/ml).

2.5 Biochemical tests for Coliforms
Conventional biochemical tests as reported by Cheesebrough [13], which include Catalase, Oxidase and Methyl red voges-proskauer (MRVP). They were done to preliminarily identify the bacteria isolates before using a commercial kit for Enterobacteriaceae (Medica-TecTM Microgen GN-ID A+B Kit) to confirm the isolates to the specie level.

Discrete colony of isolates on nutrient agar plates were emulsified in 5 mL sterile physiological saline and turbidity adjusted to 0.5 McFarland standard (approximately a cell density 1.5 x 108 cfu/mL) using the modified Kirby-Bauer method. The standardized suspension was inoculated on prepared Mueller-Hinton agar using sterile cotton swab stick to ensure an even distribution and confluent growth of the isolate. After inoculation, plates were allowed to dry before placing the antimicrobial disks aseptically using sterile forceps. The plates were incubated at 37 °C for 24 hours after which the zone of inhibition was measured in millimeters (mm) and compared against a reference standard and interpreted according to Clinical and Laboratory Standard Institute [14]

2.7 Data Analysis
The Statistical Package for Social Science (SPSS) version 20 was used to analyze the data. The result of sensitivity to tested antimicrobials were compiled in tabular forms.

The raw cow milk samples appeared fresh, creamy to whitish color with no curd formation observed. The pH readings of the sample milk were between 6.6-6.8 which were within the normal range of standard grade ‘A’. Sixty (60) bacteria species which are members of enterobacteriacea were isolated from this study with a prevalence rate of 35.5%. Other bacteria species isolated include Micrococcus luteus, some group of Staphylococcus species. The mean total bacteria count (TBC) and total coliform count (TCC) observed in this study was 2.56±0.40×104 cfu/mL and 1.06±0.16×104 cfu/mL respectively (Table 2).

Isolation of E. coli, Klebsiella specie, Proteus specie and Enterobacter specie from fresh cow milk in Sokoto Nigeria [16], this report is in close agreement with the findings from this study. Also, in a cross-sectional study carried out in Gondar town, Ethiopia identified 54 different bacterial species, and they include E. coli, Pseudomonas aeruginosa and Klebsiella pneumoniae as the most commonly identified gram-negative staining bacterial pathogens which is similar to the findings from this study [17].

In addition, majority of coliform isolates from a study conducted using the raw milk consumed in Khartoum, Sudan were E. coli, Enterobacter specie, Klebsiella specie, Serratia specie and Citrobacter [19], which closely agree to the findings from this study.

3.2 Antimicrobial Resistance observed among the Enterobacteriaceae
The antimicrobial resistance pattern observed among the identified Enterobacteriaceae species were Amoxicillin- Clauvulanic (67.31%), Tetracycline (68.75%), Erythromycin (71.74%), Ceftazidime (88.68%) and Metronidazole (96%) which is in close agreement to antimicrobial resistance of tetracycline and erythromycin reported in Kaduna, Nigeria [15], and resistance to erythromycin (85.71%) reported in Zaria, Nigeria [20]. Susceptibility was highly shown to Gentamicin (94.34%), Chloramphenicol (80.85%), and Ciprofloxacin (77.08%) among the identified Enterobacteriacea in this study (Table 4), which is similar to Gentamicin and Ciprofloxacin (100%), Chloramphenicol (93%) reported in Zaria, Nigeria [20] and also similar to reports of susceptibility to both gentamicin and Ciprofloxacin in all the tested isolates of coliform from raw milk in Ogbomosho, Nigeria [18].

Table 5 shows the pattern of resistance exhibited in the present study, this may be due to prolonged and indiscriminate usage and prescription of related antibiotics which often leads to possible resistance development in animals [21,22].

Acinetobacter iwoffii isolates were multidrug-resistant, while Pseudomonas aeruginosa were extensively drug-resistant (Table 6).  In this study, the percentage of multiple antibiotic resistance index (MARI) of greater than or equal to 0.3 was observed to be; 92% for Enterobacteriaceae (Table 7).

There are several improper sanitary checks done on the farm which could have resulted in contamination of the raw milk. These include; Unavailability of good portable water used on the farms; and improper udder preparations by inadequate washing and disinfecting with detergent; and improper pre-and post- dipping solutions; and improper periodic handwashing by the handlers, these are reasonable means of introducing contaminations directly into the raw milk. The report in this study revealed on the average low level of education and awareness among small scale dairy farm handlers on a need to maintain adequate hygiene levels during milking practices. Therefore, regulatory bodies are summoned to ensure periodic assessment and reinforcing measures to educate and monitor the dairy value chain practices in areas of concern.  Importantly, the populace needs to be readily informed and/ or reminded about the risk and dangers of consuming raw milk irrespective of their cultural beliefs, as well as educated on the need to pasteurize the raw milk before consumption.

The majority of the farm owners and handlers do not observe pre-dipping and post-dipping cleaning processes or it is performed incorrectly, which could have resulted in high bacterial contaminations including Multidrug-resistant bacteria observed in this study. Additionally, the analysis on the water used on four farms visited in this study showed the presence of high bacterial load, especially members of the Enterobacteriaceae, all these could be the leading source of contamination of the raw cow milk.

Authors Contributions: The work was conducted and reviewed in collaboration of all authors. All authors have read and agreed to the published version of the Manuscript.

Conflict of Interest: The authors declare that no conflict of interest exists.