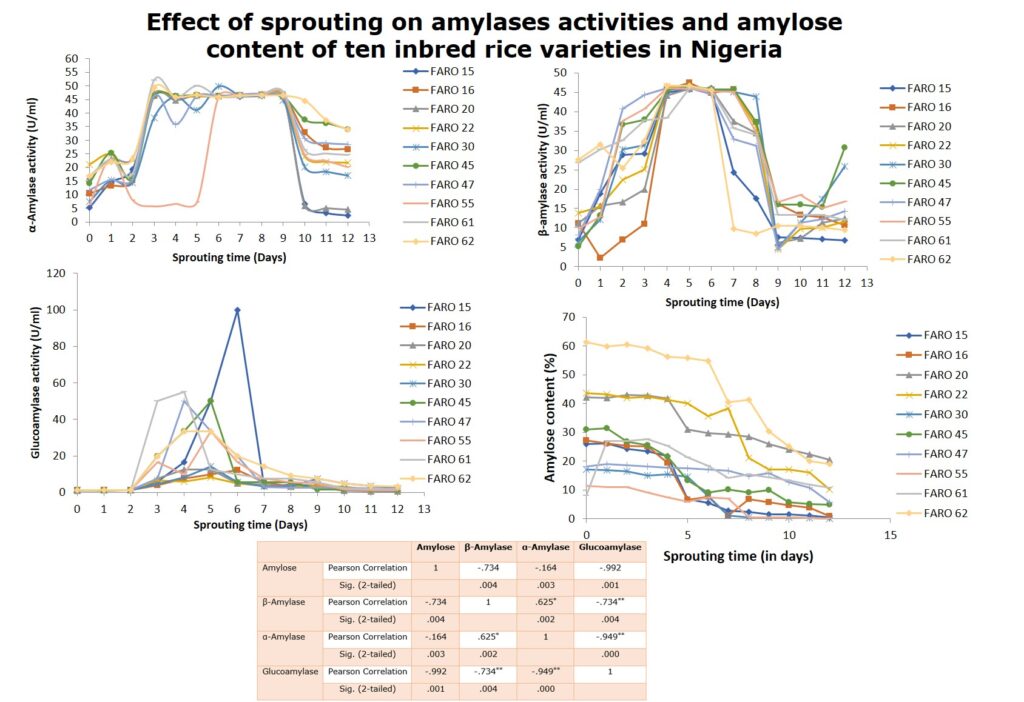 Oryza sativa (rice) is one of the grains that have an important dietary role in the nutrition of humans; it is also ranked as the third most important cereal grain after wheat and maize and is reported to constitute the most important staple food of half the world’s population [1]. In developing countries, rice plays a very important role in diets by providing 27% of dietary energy and 20% of protein intake [2].

Rice is a good source of carbohydrates, vitamins, minerals, and proteins [3]. These nutrients are said to exist in the germ and bran layer of the rice, which is almost removed during milling to produce the white rice which is consumed. Rice has a high amino acid content compared to other grains, because of its high lysine content. Rice is grown in different ecological zones of Nigeria and this has given rise to different varieties, adaptation in each zone [4]. Moreover, amylases are known as hydrolytic enzymes which are involved in the breakdown of glycosidic bonds in starch [5, 6].  Different types of amylases break down starch to give rise to oligosaccharides with specific lengths of glucose units. These enzymes are also required in the production of malt, brewing and confectionery industries to carry out certain processes that require its use [7]. Sources of these enzymes include plants, animals and micro-organisms [8].  Wheat and barley are crops, which have proven to be a good source of amylases that are required in the food industry for malt production, confectioneries etc. They are grown in the temperate regions, due to favourable conditions such as the soil texture and climatic factors [5].

The tropical climates are not favourable for the growth of barley and wheat [4]. Hence tropic region relies on the importation of wheat and barley for their food industry. Developing countries in the tropical region spend huge amounts of money on the importation of wheat for the food industry [6]. It will be of great economic benefit if wheat importation is greatly reduced and substituted with locally produced cereals grains [10].

Locally produced cereals grains such as rice has been shown to have different amylase activities, which could be utilized in the food industry [11]. Moreover, the sprouting of cereals such as rice is a process of germination, where the seeds experience further growth by producing new leaves or buds [6]. In Nutritional term, sprouting involves the practice of germinating seeds such as cereals, which is considered very nutritious to the health. During the sprouting of cereals, the metabolic activities of the seeds increase as soon as they absorb water [12]. The chemical constituents of the seeds such as the proteins, carbohydrates, lipids are being broken down into smaller units by enzymes. Enzymes such as amylases which are important in the food industry are said to be produced in a very high amount during sprouting for the breakdown of carbohydrate constituents of the seeds [13].

Since the sprouting technique could be used to increase the amylase activity, it is important to determine the activity of the amylase in some Federal Agricultural Rice Oryza (FARO) rice variety inbred in Nigeria. This could help to reduce the demand on the importation of barley for our local food industry, and also enhance economic value for farmers not only for food but also for the starch and food industries. Sprouting also modifies the amylose content property of starchy material, which could also be utilized in the starch industry and confectioneries [6]. The objective of this study is to determine the effect of sprouting on the amylase activities and amylose content of some FARO rice varieties in order to employ them in the food and starchy industry.

A hundred grams (100g) of each FARO rice sample were sprouted for 12 days, beginning from day 0 to day 12. The grains were first cleaned thoroughly; foreign materials were removed from them. The rice varieties were soaked overnight in distilled water. The excess water was removed in the morning, and further rinsed with distilled water. The samples were then spread on a clean sack made from jute in plastic trays and covered by another jute sack. They were sprayed water, twice each day and kept in a favourable condition (dark environment) to ensure sprouting. Each day 20g of the rice were dried at room temperature of 250C. They were ground using an electric blender. The powder samples were sieved using a mesh size of 600 microns and kept in containers for further analysis.

The activities of α and β-amylases were assayed from the day 0 to 12, according to the method described by Egwim and Oyelode, [15]. Αlpha amylase was extracted using the citrate buffer at pH of 5.0 while beta-amylase was done using citrate buffer at pH of 3.0. One gram (1g) of each sprouting rice variety that has been ground was added to 5ml of prechilled (0.05M) citrate buffer. The resulting homogenate was centrifuged for 10 minutes at 3200rpm. The supernatants were poured into sample bottles, for the enzyme assay.

Soluble starch slurry (2%) was prepared by dissolving 2g of starch in 100ml of distilled water. A starch slurry of 0.9ml was added to each of the test tubes, containing the supernatant from the different varieties of rice. The starch slurry and the supernatant were incubated in a shaking water bath at 500C for 30 minutes. The reaction, after 30 minutes was stopped by adding 1ml of 3, 5-dinitrosalicylic acid. They were then boiled for 3 minutes for colour development. The absorbance was read at a wavelength of 550nm, using a UV spectrophotometer. The absorbance was then converted to amylase activity, as modified by Asante et al. [16]. Standard glucose curve was prepared from glucose concentration of 0.0, 0.2, 0.4, 0.6, 0.8, 1.0 mg/ml. The Enzyme activity is defined as the amount of glucose produced per ml of the amylase solution per minute under the necessary conditions.

The glucoamylase activity was assayed according to the method described previously [17]. Soluble starch of 0.9ml of slurry (2%), which has been prepared was added to test tubes labeled with the names of different rice varieties. An extract of 0.1ml of the solution, which was pipette into the sample bottles, were also added to the various test tubes containing the names of each of the rice variety. The test tubes were then incubated in a water bath at 500C for 10 minutes. After 10 minutes, it was taken away from the water bath. 0.5ml of 1M of HCL was added to each of the test tubes to stop the reaction. 2ml of iodine prepared from 5mM of iodine and 5mM of potassium iodide were added for colour development. The absorbance was read at a wavelength of 580nm, using the UV spectrophotometer.

The Amylose content of rice samples used for this study was determined from day 0 to 12th day according to the method described by Saeed, [18]. The different rice samples of 0.32g were dissolved into 8ml of 90% Dimethysulfoxide reagent. The solution was placed in the water bath for 10 minutes at 80oC. Then cooled to room temperature for 30 minutes. After cooling, an aliquot of 1.0ml of each of the solutions was mixed with 5.0ml of freshly prepared iodine reagent and 44ml of distilled water in a volumetric flask. The freshly prepared iodine was used for colour development. The absorbance was read from the spectrophotometer set at 600nm. The value gotten was extrapolated from a standard curve of pure potatoes amylose [18].

The correlation coefficient (r) between amylase activities and the amylose content of the FARO rice varieties was calculated. It was done using SPSS (Statistical Package for Social Sciences)

The assay for the alpha-amylase activity revealed that the alpha-amylase activity of FARO 15, 16, 20, 22, 30, 45,47, 61, 62 varieties exhibited a remarkable increase from day 3 of the sprouting to day 10, while FARO 55 picked up at day 5 of the sprouting. The highest enzyme activities were seen on the 5th and 6th days for most of the FARO rice samples.

3.2 Effect of sprouting on β-amylase activity of FARO rice ample

3.3 Effect of sprouting on Glucoamylase activity of FARO rice samples

3.4 Effect of sprouting on amylose content of the FARO rice samples

3.5 Correlation analysis of amylase activities and amylose content of the FARO rice varieties

After the 10th day of sprouting, there was a decline in the production of the enzyme, which could be attributed to the fact that most of the starch reserved in the endosperm has been broken down to simple sugar units as a result; the biosynthesis of amylases was reduced. The highest alpha-amylase activities with an estimated value of 50.18×10-3- 52.17x 10-3 U/ml were seen on day 5 and day 6 of sprouting days. The trend in α-amylase activities follows the work of Asante et al. [16] who described the effect of sprouting on alpha-amylase synthesis in rice (WITA 7).

Glucoamylase is an enzyme, which is needed in the food industry for the production of high fructose corn syrup, glucose syrup. The FARO rice samples in this study showed an increase in glucoamylase activity during sprouting, the highest value of 100×10-3 U/ml was attained on day 5 of sprouting.

Moreover, most of the FARO rice samples showed good amylases (α, β, glucoamylase) activity from day 3 to day 10 such as FARO 62, 61, 45, 16, 20. The sustained rise in the amylase activities over a long period of time, suggests a high yield in the amylases during sprouting. This genetically modified rice (FARO) could be a good substitute for barley in the food and starch industry since it has shown a sustained rise during sprouting. Therefore, the sprouting of these FARO rice samples could be employed for malt production, fructose and glucose syrups in the food industry.

This present study shows that sprouting is a simple technique that increases the amylase activities of FARO rice samples. The sustained rise in the amylase activities of the FARO rice over a long period during sprouting indicates a high yield in amylases, which makes them a better source of amylase as compared to other local cereals for the food industries and brewing processes. The amylose content of the FARO rice samples can be modified using sprouting, which could be employed in the food industry for the production of starchy food products.  Furthermore, this study shows that the sprouting of our locally breed grain (FARO rice), could be a potentially useful raw material in our food industry and this will reduce over-dependency on the importation of grains such as wheat and barley for the food industry.

Competing interests: The authors declared no conflict of interest exist

Acknowledgement: The authors acknowledge the Biochemistry Department of Federal University of Technology, Minna Niger state for providing a suitable laboratory environment, where this research was carried out.

Authors’ contributions: All authors participate in the execution of this project. All authors read and approved the final manuscript.