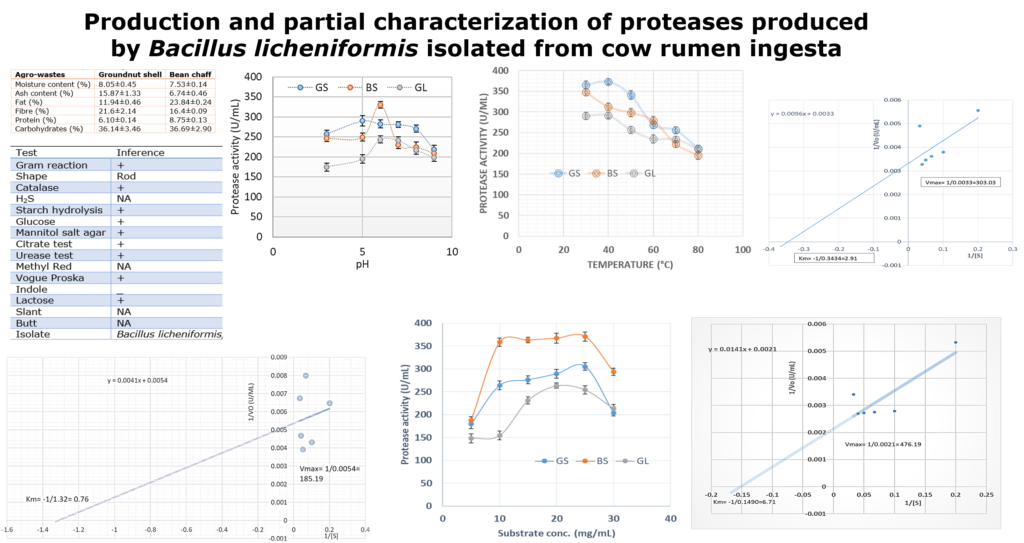 The global market for industrial enzymes is increasing from year to year, it constitutes the largest product segment in the global industrial enzymes sales in various industrial market sectors such as detergent, food, pharmaceutical, leather, diagnostics, waste management and silver recovery [1].  Considering this market demand, there is a need to investigate new microorganisms because they are the major sources of all commercially important alkaline proteases, which have unlimited industrial applications [2]

Proteases are produced from different groups of organisms such as bacteria, yeast, fungi, plants and animals [3]. Bacteria, mainly the Bacillus group, are the major source of commercial proteases since they easily produce extracellular enzymes using fermentation techniques, thus enabling simple downstream processing[3]. The characteristics of proteases from Bacillus vary, depending on the conditions of their native habitat [4]. For example, proteases produced by a mesophilic Bacillus subtilis isolated from soil sample has optimum activity at 40°C and neutral pH [5]. Meanwhile, a thermophilic Bacillus toebii strain LBT 77 isolated from a hot spring has optimum activity at 95°C and pH 13. The activity of the enzyme increases with the addition of 25% acetonitrile, methanol, ethanol, and n-butanol [6].

Agricultural-based industries produced a vast number of residues every year [7]. If these residues are released to the environment without proper disposal procedure that may cause environmental pollution and harmful effect on human and animal health [8]. Most of the agro-industrial wastes are untreated, underutilized,  and are therefore disposed either by burning, dumping or unplanned landfilling [9]. These untreated wastes create different problems with climate change by increasing the number of greenhouse gases. Besides this, the use of fossil fuels also contributes to the effect of greenhouse gases [10]. It is therefore important to seek for alternative cleaner and renewable bioenergy resources [11].

These wastes cause a serious disposal problem. For example, the juice industries produced a huge amount of waste as peels, the coffee industry produced coffee pulp as waste, and cereal industries produced husks. All over the world approximately 147.2 million metric tons of fibre sources are found, whereas 709.2 and 673.3 million metric tons of wheat straw residues and rice straws were estimated, respectively, in the 1990s  [12]. As per the composition of these agro-industrial residues are concerned, they have a high nutritional perspective, therefore they are getting more consideration for quality control and are also categorized as agro-industrial by-products [13].

Groundnut shells account for approximately 20% of the dried peanut pod by weight, meaning there is a significant amount of shell residual left after groundnut processing[14]. Increased groundnut production leads to the accumulation of these groundnut shells which is not utilized, thus either burnt or buried. As Groundnut shells are rich in many functional compounds, it can be utilized in multiple ways [15].

Beans are extensively grown in different parts of the world and, in particular, in the Mediterranean region [16]. Bean can be used as a dietary item alone or can serve as a potential supplement to cereal diets, especially for the preparation of inexpensive protein-rich food for children [17]. It contains 25.2% of proteins, 46.5% of carbohydrates, 1.5% of lipids and 10.3% of dietary fibre[18]. Beans are usually available throughout the year as fresh, frozen and fully mature. Due to the high consumption of beans, massive amounts of the peels (as waste) are disposed of, causing a severe problem in the community [19].

In the interest of the environment, we utilized this agricultural waste as a carbon source for microbial protease production. Therefore, the aim of this study is to isolate, partially characterize and produce protease from microorganisms isolated from the cow rumen ingesta using groundnut shell and Bean chaff as the carbon sources

2.2 Collection of samples
The dump site was collected in a sterile polythene bag from the sewage sludge wastes site and immediately transferred to the laboratory for the isolation of microorganisms. The groundnut shell and Bean chaff were obtained from Kpakungo Local Government area of Minna, Nigeria

2.4 Isolation of microorganism
One gram (1gm) of domestic dumpsite sample was mixed with 9ml of saline solution (Master dilution) and 1ml of the solution was serially transferred to tubes containing 9 ml saline each so that for each transfer the suspension was diluted 10 times [23,24]. Each tube was shaken vigorously. 0.1ml solution was spread to Petri plates containing sterilized nutrient agar and saboroud dextrose agar for bacterial and fungal isolation. The pure isolates were stored in bottles for further studies [25,26].

2.5 Identification of Proteolytic Bacteria Isolated from Soil
The selected potential strain was then identified by morphological and biochemical characteristics by using the microbiology laboratory manual [27]. In addition, the morphological properties including the cell shape, pigmentation, fluorescence, spore shape and hyphae (fungi) of the isolated bacteria were studied using a microscope.

2.7 Production of Protease Enzyme by Submerged Fermentation
Protease production was carried out by inoculating protease producing isolate into a basal medium (NH4Cl-0.5%, NaCl-0.5%, CaCl2-0.2%, MgCl2.6H2O-0.2%, K2HPO4-0.4%, KH2PO4 0.3%) containing 0.7% peptone and 0.5 % as nitrogen and carbon source respectively. The mixture was adjusted to pH 7.5 and maintained at 37oC on a shaker at 250 rev/min for 96 hours. Samples were withdrawn and centrifuged every 12 hours and the supernatant was regarded as a crude protease enzyme [29].

2.8 Determination of Protease Enzyme Activity
The activity of protease was assessed in triplicate by measuring the release of trichloroacetic-acid soluble peptides from 0.5% (w/v) casein in Tris-HCl (pH 9.0) at 60◦C for 10 min. The 1mL reaction was terminated by adding 0.5mL of 10% trichloroacetic acid. It was left for 15 min and then centrifuged at 14000 g for 10 min. One unit of enzyme activity was defined as the amount of enzyme required to release 1 μg of tyrosine/min under standard conditions [30]

2.9 Optimization and determination of Kinetic Parameters of Protease Enzyme

2.10 Data Analysis
The analysis was conducted in triplicate. Statistical evaluation of data was performed by using Statistical Package for Social Sciences (SPSS). The values reported are means ± SEM. One-way analysis of variance followed by Duncan post hoc test for multiple comparisons was conducted. Values with a p< 0.05 (confidence level = 95%) are consider significant

3.2 Identification of Bacillus licheniformis.as efficient protease producing microorganism under the carbon source of groundnut shell and Bean chaff
A total of five microorganisms were isolated from the domestic dumpsite and screened for protease production on a skimmed milk agar plate. Among the isolates gotten from the domestic dumpsite, isolate A was observed to possess the highest proteolytic index and thus further screened for protease production by means of submerged fermentation on two different agro-industrial wastes and glucose as carbon sources.  The selected isolate was subjected to a series of biochemical tests and was identified as Bacillus licheniformis.

The Bacillus licheniformis (Table 2), shows the highest proteolytic activity (due to its ability to hydrolyze skimmed milk) among the other isolated tested for protease production by submerged fermentation using groundnut shell, Bean chaff and glucose as carbon sources. The ability of the isolate to hydrolyze skimmed milk implies that the isolate was able to produce protease(s) which are known to degrade proteins. The presence of the isolate in the domestic dumpsite from which it was isolated may be as a result of the presence of protein-rich kitchen wastes dumped at the site [35]. Therefore, from these findings, it is safe to say that the domestic dumpsite harbours a number of proteolytic bacteria that can be used in many industries.

Table 2: Biochemical tests for the identification of the selected isolate

Figure 2: Effect of change in temperature on the activities of proteases produced by Bacillus licheniformis grown on groundnut shell, Bean chaff and glucose as carbon sources

The Km value indicates the affinity of enzymes for a particular substrate and a low Km implies strong affinity. Therefore, the lower Km of proteases produced by B. lichenformis grown on glucose implies that the bacterium preferred glucose more than the agro-industrial wastes as a carbon source. However, after glucose, the enzyme preferred groundnut shell as a carbon source than the Bean chaff. This may be as a result of the higher nutritional content of the groundnut shells (Table 1). Aguilar et al., [37] also reported a low Km value (1.60 mg/mL) for protease produced by B. lichenformis grown on agro-industrial wastes.

4.0 Conclusion
From the results obtained in this study, it could be concluded the screened agro-industrial wastes served as better carbon sources for B. lichenformis and could be used in place of glucose. However, groundnut shell showed a more promising effect as a carbon source for protease production than Bean chaff due to thermal stability and lower Km of protease produced with it than of Bean chaff. The presence of B. lichenformis reveals that domestic dumpsite could be an important source of proteolytic bacteria with numerous industrial applications.