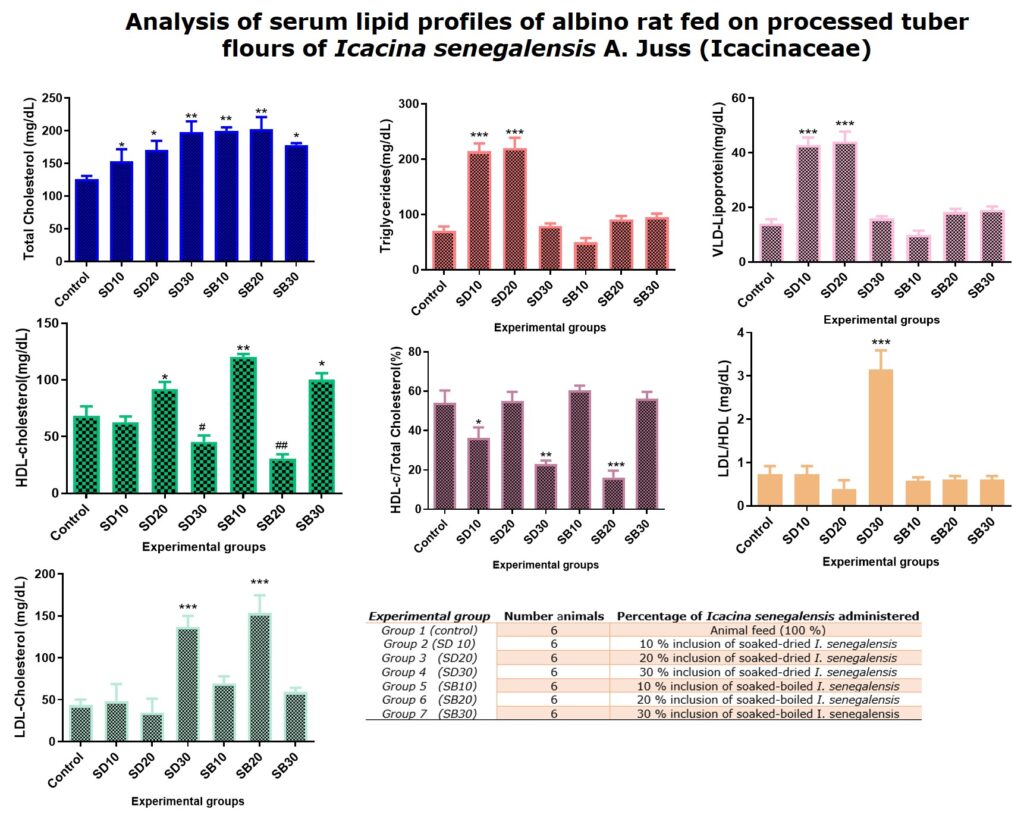 Background: This study was aimed at evaluating the cardiovascular changes following the oral administration of processed under-exploited plant tuber; Icacina senegalensis. Methods: The tubers were peeled, chopped, and soaked in water (1:3 w/v) for 3 days. After which, it was divided into two portions (SD and SB). SD portion was oven-dried at 40 0C for 2 days, SB portion was further boiled (1:3 w/v) for about an hour, then, strained and oven-dried at 400C for 2 days. The two portions were pulverized and formulated into SD10, SD20, SD30, SB10, SB20, and SB30 respectively. Forty- two albino Wistar rats were used for this experiment and these were divided into seven groups consisting of six rats each. Group one was fed with normal rat chow while groups 2 to 7 were fed with the formulated diets respectively. At the end of thirty days feeding experimental period, the total cholesterol (TC), HDL-cholesterol, LDL-cholesterol, VLDL-cholesterol, and Triglyceride (TG) were estimated Results: Serum lipoprotein concentrations and atherogenic index of graded doses of Soaked Dried, SD, and Soaked then boiled, SB, Icacina senegalensis tuber evaluated showed that rats fed with SD 20, SB 10, and SB 30 had higher High-Density Lipoprotein, HDL-c concentrations compared to that of the control group. Consequently, their Atherogenic Index ratios were 0.39, 0.58, and 0.61 respectively as compared to the control group value, 0.73, while rats fed with SD 10, SD 30, and SB 20 had ratios of 1.27, 3.15, and 5.39 respectively. Conclusions: Dietary inclusion of flours of soaked-dried and soaked-boiled Icacina senegalensis tubers at levels used in this study caused improvement in cardiovascular well-being in a rodent model.

Cardiovascular disease (CVD) is globally known as a deadly disease with varying mortality rates from country to country [1]. The majority of CVD death occur in poorer regions of the world from mostly stroke and heart attack [2]. This could be attributed to the fact that people from low socio-economic countries switch their lifestyles to accommodate unhealthy dietary habits and unhealthy behaviour as a means of survival. They may also be prone to other risks factors of CVDs [1, 3].

There are so many edible and nutritious plant crops in forest reserves that are not yet being discovered nor utilized. Icacina senegalensis plant is one of the under-exploited plants [4] which belongs to the family of Icacinacaea [5]. It grows naturally on both farmlands and fallow lands. It is also cultivated especially in Senegal, Nigeria, and other parts of Africa [6]. It is commonly found competing and mimicking yam plantation, as a result, the name ‘false yam’ was originated. Thus, some elites refer to it as ‘illegitimate’. The plant was reported to contain some anti-nutrients [7] such as saponin, phytates, flavonoids, tannins, and alkaloids but at non-toxic levels [8] which can be effectively removed by hot water [9].

The tubers of Icacina senegalensis were purchased from the wild in Akpabuyo local government, Cross River State. These were identified and authenticated by a Taxonomist in the Botany Department, the University of Calabar with voucher specimen number 0620.

Icacina senegalensis tubers were peeled, washed, and cut into tiny pieces (about 2 cm in size). The pieces were soaked in water for three (3) days with a daily change of water, after which it was divided into two portions; Soaked-Dried (SD) and Soaked-Boiled-Dried (SB). SD portion was drained and oven-dried at 40 oC while SB portion was boiled for 30 minutes, thereafter drained and oven-dried at 40 oC.

Both SD and SB samples were then pulverized into respective flours and were formulated into 10, 20, and 30 per cent of the respective flours by adding 90, 80 and 70 per cent respectively of normal rat chow. The flour and rat chow were blended for each supplemented portion and prepared into a thick homogenous paste by adding boiled water. The resulting paste was pelletized manually and oven-dried at 40oC. Each pelletized feed was stored in a capped container and labelled appropriately awaiting the feeding experiment.

A total of 42 Albino Wistar rats were used for this research. The rats were purchased from the Animal House in the department of Biochemistry, University of Calabar. The animals were allowed to acclimatize for two weeks in the animal house with a room temperature of about 23 oC. Ethical approval for the use of albino Wistar rats was issued by the Department of Biochemistry Ethical Committee, Federal University of Technology Owerri. The rats were then grouped into 7 with six (6) rats each. Group 1 (normal/control) was given 100 % normal rat chow, groups 2-7 were placed on the graded diets according to the design in Table 1. The feeding was done for 30 days. The animals were given free access to food and water

At the end of the 30-day experimental period, the animals were weighed and sacrificed by the cervical dislocation method. Blood samples were obtained from the heart by cardiac puncture into plain bottles using a sterile needle and syringe. The blood samples obtained were allowed to coagulate and centrifuged at 2500 rpm for about 10 minutes. Serum was aspirated and refrigerated for further biochemical analyses

Also, the method described by Browner [16], is used to determine the concentration of very-low-density lipoprotein in plasma. However, it is maintained that the relationship holds best when the triglyceride level is within the level of 500 ± 100 mg/100 ml.

The results of this study were presented as mean ± S.E.M and statistically analyzed using one-way analysis of variance (ANOVA) with Statistical Package for Social Sciences, SPSS (version 20) window statistical software programme. Student “t” test was used for pair-wise comparison, and differences were considered significant at *p<0.05, **p<0.001, and ***p<0.001.

Atherogenic index (AI) ‘calculated as LDL, is a measure of susceptibility to cardiovascular disease. In this study SD 20, SB 10 and SB 30 had lower AI (0.39, 0.58 and 0.61 respectively) than the control group (0.73) while the changes observed in SD10 was non-significant compared to the control group. This, therefore, means that the inclusion of SD 20, SB10, SB30 and SD10 in the rat diet did not have adverse effects on the heart.  This could be attributed to its high neutral detergent fibre content and low levels of crude fat [7, 10].

‘Dietary fibre in tuber crops is known to have cholesterol-lowering effects as well as facilitating HDL-cholesterol absorption’ [17]. The interference of bile absorption by fibre could result in the excretion of bile in faeces. Thus, the liver could tend to produce more bile salts to replenish the lost ones. Consequently, the liver could increase the production of LDL-receptors, which are very vital in ensuring the availability of cholesterol pulled out from LDL cholesterol in the bloodstream, required for the production of bile salts.

This implies that more LDL- Cholesterol would be pulled out of the bloodstream, as more bile salts are synthesized.  Similarly, cholesterol levels produced by the liver may be reduced or inhibited by short-chain fatty acid synthesized during the fermentation of fibre.Studies have revealed that LDL cholesterol can be reduced by five (5) per cent with an increase in daily fibre intake of about 5 to 10 g.The fibre content of Icacina senegalensis [11, 10] may account for the generally low AI observed in this study. Hence, the result of this study suggests that the inclusion of SD 20, SB 10, and SB 30 have a cardio-protective effect while groups of rats fed with SD 10 and SD 30 have no risk of cardiovascular disease on rats fed with it.

Dietary inclusion of flours of soaked dried (SD) and soaked-boiled (SB) Icacina senegalensis tubers at levels used in this study caused improvement in cardiovascular well-being in a rodent model. Further research is required to ascertain the cardio-protective effect observed in this study. Also, isolation and characterization of the active component of this tuber are essential. Thus, processed Icacina senegalensis tuber could serve as an alternative dietary supplement for both humans and livestock.

Authors’ contributions: NOE conceived and designed the study. HMA, CIN, MA acquired data, analyzed, and interpreted the obtained data, alongside NOE. All the authors were responsible for drafting the manuscript, reading and approving the final manuscripts.

Competing interests: No conflict of interest

Funding: The authors funded the research.