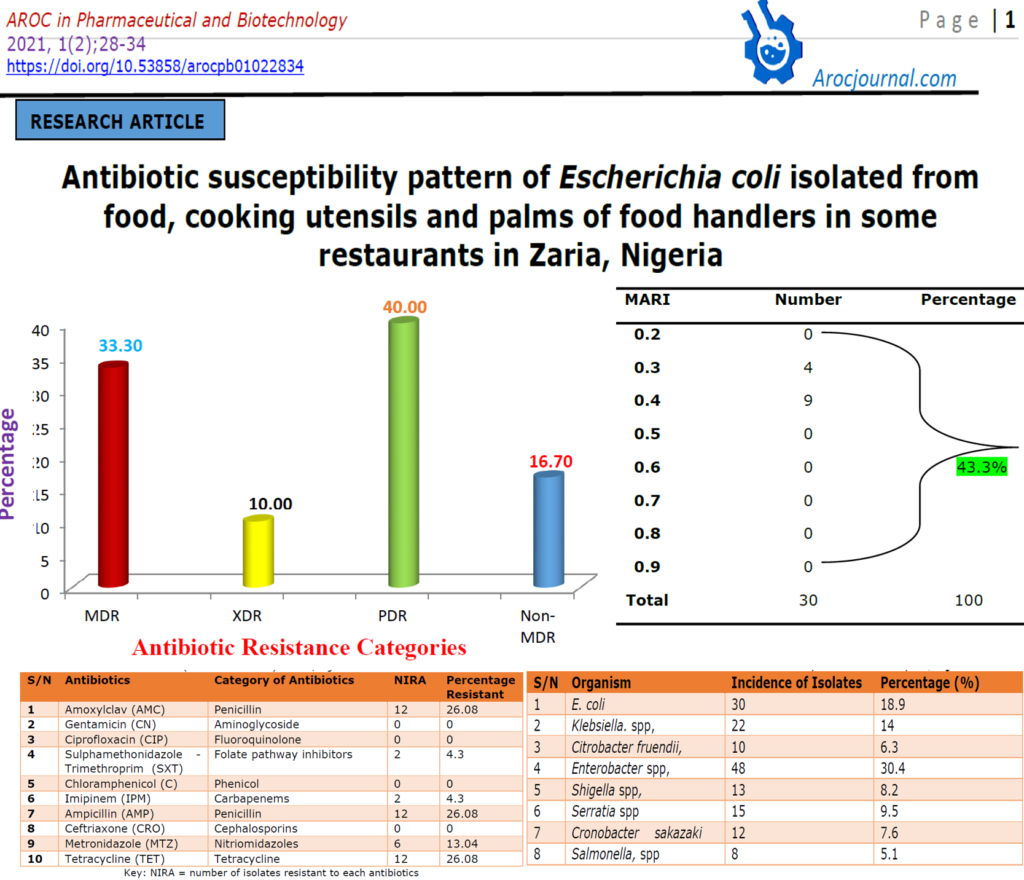 Antibiotic susceptibility pattern of Escherichia coli isolated from food, cooking utensils and palms of food handlers in some restaurants in Zaria, Nigeria

Foodborne disease is a major public health problem causing considerable morbidity and mortality annually. In the present study, the antibiotic susceptibility patterns of Escherichia coli isolated from food, cooking utensils and palms of food handlers in some restaurants in Zaria, Nigeria were evaluated. A total of 250 samples (220 food samples, 7 hand samples of food handlers, 10 plate samples within restaurants and 13 spoon samples) were collected from five locations in Zaria, Nigeria and analysed for microbial contaminations using standard microbiological techniques. The antibiotic susceptibility pattern of the isolates was determined using Kirby-Bauer modified disc agar diffusion technique. Results revealed that out of 158 acclaimed Enterobacteriaceae isolates evaluated, 19 % (30) were confirmed to be E. coli, while 81 % were Klebsiella. spp, Citrobacter fruendii, Enterobacter spp, Shigella spp, Salmonella spp, Serratia spp, and Cronobacter sakazaki. The majority of the isolates were resistant to amoxiclav (26.08%), ampicillin (26.08%), tetracycline (26.08%) and metronidazole (13.04%). A 33.3% of the isolates were multidrug-resistant. The E. coli isolates were mostly multiple antibiotic resistance with 43.3% having multiple antibiotic resistance index (MARI) ≥ 0.2. In conclusion, E. coli evolved resistance to ampicillin, Amoxicillin Clavulanic acid, and Tetracycline and other tested antimicrobial drugs which would make the treatment of Escherichia coli infections difficult

Food is an essential ingredient for the good health and sustenance of human life. It’s important, therefore cannot be overemphasized. In most African countries especially Nigeria, people depend mostly on vended food and food from public restaurants for consumption [1]. There is a rise in the patients with foodborne diseases resulting from street vended fruits and vegetables. Food purchased from the food vendors such as restaurants or food hunts is also susceptible to microbial contaminations. Improper washing of fruits and vegetables, untreated human faeces and agricultural bio-solid were major predisposing factors [2].

Adequate education on proper hygiene, decontamination approaches towards improving the quality of fruits and vegetables vended in Nigeria were recommended by most authors. These foods are consumed at the point of sale without any further treatment such as heating [1-2]. In the northern part of Nigeria such as Kaduna foods such as cooked rice, cooked beans, moimoi, fried yam, Salad, eba, Egusi soup, cooked semovita, Beans cake, and Pounded yam are mostly purchased at food vendors. Based on the relatively cheap and easily available of these ready-to-eat foods, their consumption has increased over the few years [3].

Despite the excessive patronage of these food vendors /handlers; it is very essential to ensure the safety level of these foods from contaminants and microorganisms. Over the years Foodborne disease outbreaks linked with foods have been associated with various foodborne pathogens [3, 4]. Foodborne diseases are a major global problem causing considerable morbidity and mortality annually [5].

Increased antimicrobial resistance to most antibiotics prescribed has been reported to be mostly caused by Escherichia coli which are one of the most important opportunistic pathogens ever recorded from humans [6]. Antibiotic resistance in E. coli has become a serious and growing phenomenon in contemporary medicine, and it’s emerging as one of the preeminent public health concerns of the 21st century reported by several studies on bacterial drug resistance especially in E. coli [7]. The magnitude of extraintestinal infections by E. coli was reported to be in the range of 6 to 8 million with 0.1 million cases per year of sepsis in the United States [8], with an increase in antibiotic resistances every- day [9].

Since resistance properties accrue through different routes, such as natural or intrinsic, mutational changes, and acquisition of plasmid or transposons. This study aims to investigate the antibiotic susceptibility of E. coli isolates from some food samples, cooking utensils and palm of food handlers in some restaurants in Zaria metropolis; in order to proffer better treatment option during therapeutics.

2.2 Ethical Clearance
Ethical approval for this work was obtained from the ethical committee of Ahmadu Bello University committee for research in human subject.

2.3 Swab sample collection
The hand-swab, spoon-swab and plate-swab samples were collected by swabbing the palms, spoons, and plates of the food vendors with sterile swab sticks and were transported to the Pharmaceutical Microbiology laboratory for analysis

2.4 Identification of the Isolates
The red colonies were selected from each MacConkey agar plate. Gram staining methods and further biochemical tests were carried out to identify and characterize the organisms that were isolated from the food and cooking utensils samples. Further confirmation was carried out using Microgen test kits [10].

2.5 Antimicrobial Susceptibility testing
The Modified Kirby-Bauer disc diffusion method was used to determine the antibiotic susceptibility of isolates which has been identified and confirmed by biochemical tests. Discrete colonies of isolates on nutrient agar plates were emulsified in 5 ml of sterile physiological saline and the turbidity adjusted to 0.5 McFarland standards (approximately a cell density of 1.5 × 108 CFU/ml). The standardized suspension was inoculated on Mueller Hinton agar using a sterile swab to ensure even distribution and confluent growth. The disc of the various antibiotics was aseptically placed using an antibiotic dispenser, a pre diffusion time of 30 minutes was allowed and the plates were then incubated at 37oC for 18 hours. After incubation, the diameter of the zones of inhibition produced by each antibiotic disc was measured and recorded. The results were interpreted according to the Clinical and Laboratory Standards Institute [11].

Key: NIRA = number of isolates resistant to each antibiotics