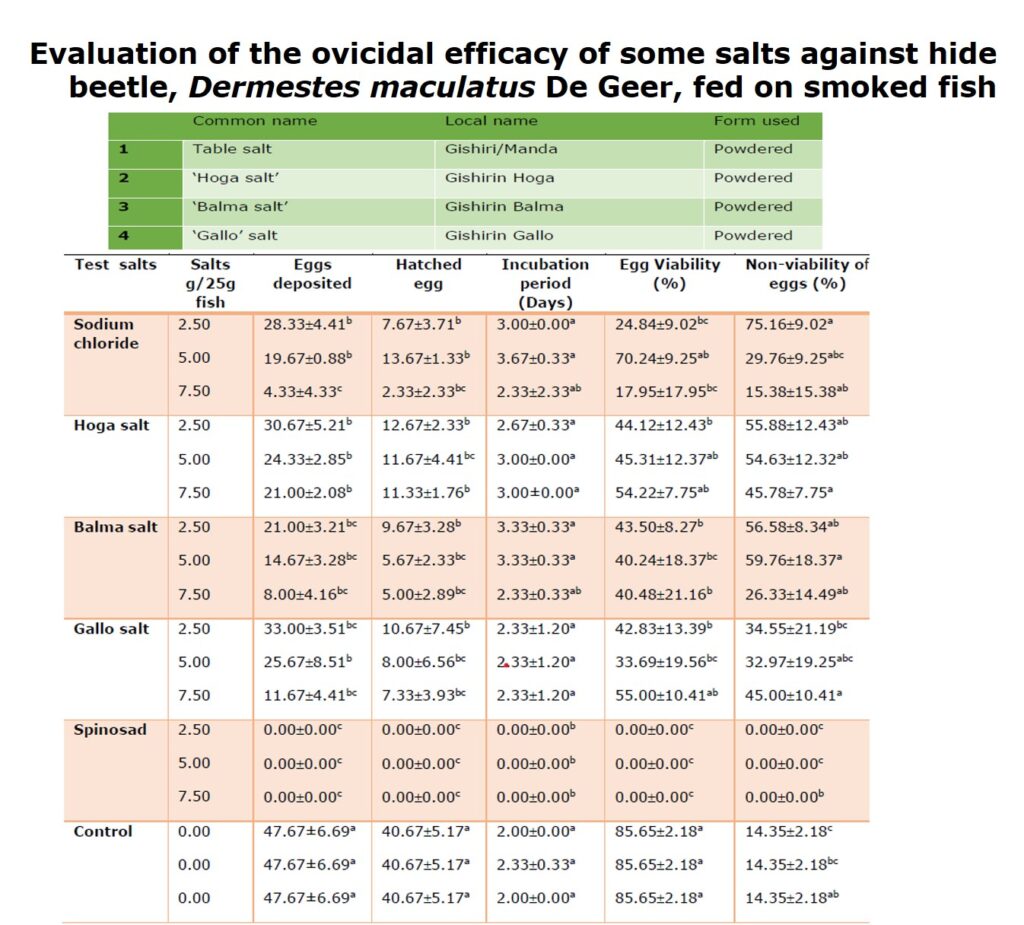 Evaluation of the ovicidal efficacy of some salts against hide beetle, Dermestes maculatus De Geer, fed on smoked fish

Background: The ovicidal efficacy of some selected salts against the hide beetle Dermestes maculatus fed on dried fish was studied at the insectary of the Department of Biological Sciences, Usmanu Danfodiyo University Sokoto. Methods: Beetles D. maculatus was reared under ambient laboratory conditions. The milled salts at 2.5, 5.00 and 7.50g were used against 25g of dried fish. Five pairs of newly emerged adults of D. maculatus were introduced into the different Petri dishes containing dried fish treated with each of the salt types. The Petri dishes were arranged in a completely randomized design and left undisturbed in the insectaries for seven months. Results: Data obtained showed that the four different salts used at varying doses were both significantly (p<0.05) effective in the development of various stages of D. maculatus eggs. The lowest number of eggs deposited. 4.33, was observed on sodium chloride treated fish at its highest dose of (7.5g/25 g) of food, followed by Balma salt (21.00) and 14.07 at 2.5 and 5.0g/25 g of fish. All these salts, Sodium chloride, Balma, Gallo and Hoga were observed to be significantly effective (p<0.05) as compared to control. It was observed that the effects of these salts were dose-dependent. Conclusions: The four different types of salts at various concentrations suppress the viability of eggs. The concentrations of the salts played a vital role in controlling the fish beetles, the higher salts concentration provide adequate protection. These salts are therefore recommended to be used against hide beetle infestation of dried smoked fishes

The order Coleoptera which includes beetles is the most diverse order of the class Insecta, (Phylum Arthropoda), this is the largest group of comparable units among all animals [1]. There are about 350,000 named species of beetle in the world, and many more species remain unnamed and undiscovered [2]. The genus, Dermestes belongs to the family of beetles called Dermestidae which are found throughout the continental United States and Canada, South East Asia and Italy [3]. There are approximately 500 to 700 species worldwide.

Dermestes which literally means “skin eaters” play a very minor role in disease transmission,  but they breed on any animal protein and can be a serious pest in hide warehouses, tanneries,  milk processing plants, and other premises where animal products are processed [4]. Dried fish products do deteriorate very rapidly from a beetle infestation of the genera Dermestes and Necrobia [5]

A major portion of the rural population in Nigeria are engaged in small scale fishery operations that directly affect their wellbeing by means of employment opportunities as well as food consumption [6,7]. Most of the catches are preserved by smoking and transported to distant markets for commercial purposes, Reports have proved that most of the dried fish that is carried to long distant markets are susceptible to beetle attack during storage and marketing [8].In addition, Ayuba and Omeji [9] reported that the insect infestation is the cause of most prominent losses in quality and quantity of stored dried fish in Nigeria, particularly when the moisture content is low, Dermestes beetles ravish the product causing severe loss.

Fish and fish products constitute an important commodity in the international trade, with more than 50 billion indicating increasingly consumer interest in the commodity [10]. Fish is very important in terms of employment, income generation, poverty alleviation, foreign exchange earnings and provision of raw materials for the animal industry [11].

The infestation of fish products by Dermestes maculatus reduces the palatability of the products and rendered them invaluable due to its larval feeding habit; the longer dried fish is stored, the greater are the losses due to beetle infestation [12]. These damages caused to dried fish by these larvae is due to their voracious feeding activity and boring of the edible portion of the dried fish by the late instar larvae during a normal period of storage, thus reducing the fish to mere frass and bones within weeks [13]. Ufele et al. [14] report that dried and smoked stored fish products are prone to insect pest infestation and have been estimated that post-harvest losses of fish account for between 10% and 35% by weight of the world fish catch as a result of poor handling, processing and storage. Oke et al., [15] observed that the nutritive benefits of the catfish are threatened by its infestation by D. maculatus during storage. The infestation of dry fish when not controlled could lead to a total loss of resources, especially for farmers who spent so much on raising the fish [16]. In addition, Lale and Sastawa, [17] reported that losses of 13-17% during long storage of dried fish in Nigeria were caused mainly by the skin beetle, D. maculatus De Geer, the principal post-harvest pest of dried fish.

It has been a common practice among the fish traders to apply common salt to protect their fish products from the infestation of hide beetle (Susuwa or Sari) and it has been seen that the use of salt practice works in the protection of fish [18]. It’s actually this usage of the salt for protecting the dry fish from the hide beetles which prompted me to at least work out the facts behind it whether it has ovicidal efficacy against the beetles. In the light of these practices and the nutritional and commercial value of dry fish, the present research studied the ovicidal properties of the common salt along with some other salts available in the market, with the hope that the result obtained will provide a baseline data for further advance work.  Therefore, the main objective of this research is to evaluate the ovicidal efficacy of a different types of salts against the hide beetle (D. maculatus) one of the major pests of hides and smoked fish in Nigeria.

Adults of hide beetle D. maculatus were obtained from infested stores of dried smoked fish in Sokoto Market. Beetles were kept in the plastic jars covered with muslin cloth and tight with a rubber band to prevent the insects escape and kept in the insectary Department of Biological Sciences Usmanu Danfodiyo University Sokoto. The hide beetles were then fed on the disinfested dried smoked fish. Water was also supplied soaked in cotton wool to aid oviposition. The adult beetles laid eggs that hatched into larvae and changed to pupae. The pupae were then separated from this stock and transferred into separate plastic jars to obtain the newly emerged adults that were used for experimental purposes [19].

The dried smoked African cat fish used in the current study was Clarias gariepinus purchased from smoked fish traders in Sokoto Central Market, was disinfected by freezing at 20oCfor three days to remove any insect infestation, following methods of  Zhang [20] and Okpako and Agbor [21]. The dried fish was used as food during the experiments.

2.3 Collection and Preparation of Salts

The four types of salts selected based on their usage by fish traders against D. maculatus (Table 1) were obtained from local traders of salts at Sokoto central market, and were taken to the Biological Sciences Department laboratory, where they were milled using pestle and mortar and sieved, and using 0.2mm size mesh. These salts were labeled and kept separate in sterile plastic containers and placed in a cool dried place.

The spinosad (Spintor dust) powder which is used as standard was obtained from the Department of Zoology, University of Lagos and also kept in a cool dry place prior to use in the experiment.

In the fifth petridished the fish was treated with 2.50g of conventional insecticide spinosad, while in the sixth Petri dish, the fish was not treated at all and served as control.  Five pairs of newly emerged adults of D. maculatus were collected from the mother stock and inoculated into Petri dishes and arranged in a completely randomized design. The same procedure was repeated with an increase in the amounts of Salt types to 5.00g and 7.50g separately. The observation was made on the development of eggs.

Data was subjected to analysis of variance (ANOVA) using the General Linear Model procedure of the statistical analysis system of SAS. Differences among the means were separated using Duncan New Multiple Range Test (DNMRT) at 5% level of significance.

Observations on the various developmental parameters of eggs of D. maculatus laid on dried smoked fish treated with varying doses of different salts along with standard insecticides are presented in Table 2. The result reveals that the number of eggs deposited number of hatched eggs, the viability of eggs, and the non-viability of eggs were significantly (P<0.05) affected by varying doses of different salts when compared with that untreated and treated with standard insecticide.

All these salts were observed with significant effect as compared to control (P<0.05). This finding shows that Dermestes eggs are susceptible to dried smoked fish treated with salts particularly when the salts are in high concentrations. These results are in conformity with a previous study by Onyuka et al. [22] who reported that the adults and eggs of Dermestes beetles were dead on the dried fish treated with 30% salt concentration.

Data are Mean±SEM (n=3). Data in each column followed by same letter are not significantly different (P>0.05) by Duncan New Multiple Range Test

The number of hatched eggs was significantly (P<0.05) affected (reduced) when deposited on fish treated with varying doses of salts. Eggs hatched on sodium chloride at a higher dose (7.5g/25g) showed a highly significant effect on the number of hatched eggs reducing it to 2.33 and 7.67 at 2.5g/25g and Balma salt (5.00 at 5g/25g) of fish. These observations agreed with the report of Osuji [18] who observed that salting caused reduced fecundity and egg viability. Esser [23], also noted that Chrysomya megacephaly readily oviposited on fish with relatively high salt content.

The incubation period of eggs was observed to be slightly reduced among eggs deposited on food treated with varying amounts of salts. All these salts were observed with insignificant effect as compared to the control (P<0.05). Though, it was observed to be decreasing with the amount of each salt (Table 2). This is in line with Adebayo [24], who reported that there was a significant difference between the attack of D. maculatus on the salted and unsalted fish, beetles on the salted fish live, and deposit eggs for about 12 days, but for the unsalted fish, it was 42 days.

The viability of eggs was significantly (P<0.05) reduced among eggs deposited on food treated with varying doses of different salt (Table 2). The lowest egg viability (17.95%) was observed on sodium chloride at its highest dose of 7.5g/25g followed by Balma, Hoga, and Gallo salts. All these salts were observed with a significant effect on the viability as compared to the control (P<0.05). This is in line with the work of Abolagba et al. [25] who observed that common salt (NaCl) is the most effective in preserving smoked fish from eggs deposition by D. maculatus and a healthy option for the prevention of D. maculatus from Smoked fishes.

Authors’ contributions: This work was carried out as a collaboration between all authors. All authors read and approved the final manuscript.

2.      Nikitsky, N.B. Generic Classification of the Beetle Family Tetratomidae (Coleoptera, Tenebrionoidae) of the World, with Description of New Taxa; Pensoft: 1998.

9.      Ayuba, V.; Omeji, N. Effect of insect infestation on the shelf life of smoked dried fish. In Proceedings of Proceedings of the 21st Annual Conference of the Fisheries Society of Nigeria (FISON), Calabar, 13th-17th November; p. 357.

17.    Lale, N.; Sastawa, B. The effect of sun‐drying on the infestation of the African catfish (Clarias gariepinus) by post‐harvest insects in the Lake Chad district of Nigeria. International Journal of Pest Management 1996, 42, 281-283.

20.    Zhang, B. Study on the efficacy of freezing against museum pest insect Dermestes maculates. Current Research Journal of Biological Sciences 2012, 4, 333-336.

21.    Okpako, E.; Agbor, R. Use of Monodora myristica as Surface protectants against Dermestes maculatus on stored Clarias gariepinus. Advances in Biochemistry and Biotechnology 2015, 1, 1-6.