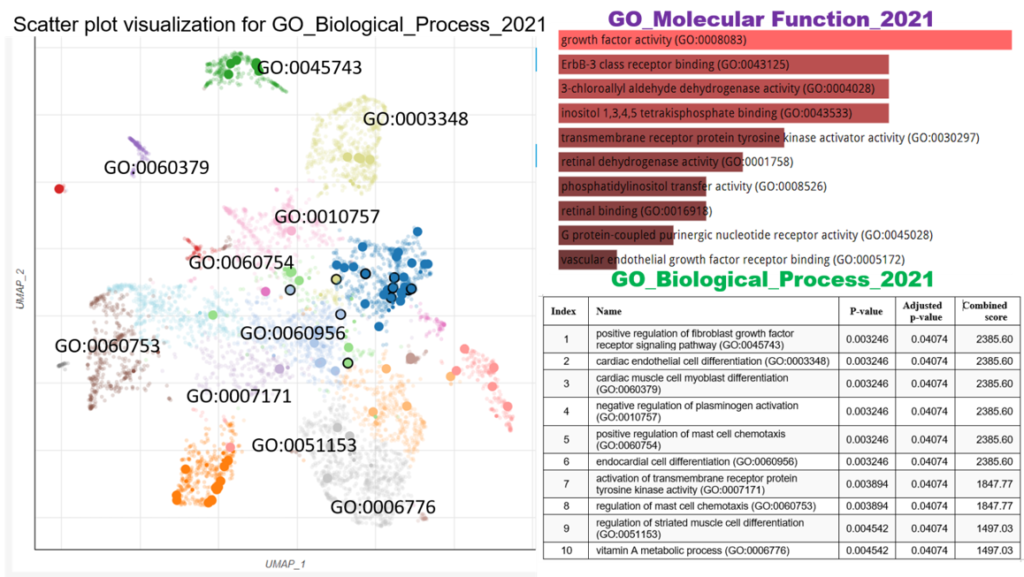 Background: The molecular mechanism of human African trypanosomiasis remains to be fully understood. It is urgently required to identify genes that are associated with trypanosome development and prognosis and to elucidate the underlying molecular mechanisms. In the present study, we aimed to identify potential pathogenic and prognostic differentially expressed genes (DEGs) associated with human trypanosomiasis through bioinformatics analysis of genetic profiles from infected patients. Methods: The gene expression dataset of trypanosome infected (GSE85996) patients were obtained from the Gene Expression Omnibus (GEO). DEGs were identified using the LIMMA Package of R. The GO (Gene Ontology) and KEGG (Kyoto Encyclopedia of Genes and Genomes) analyses were conducted through Enrich. The protein-protein interaction (PPI) network of the DEGs was established through the STRING (Search Tool for the Retrieval of Interacting Genes database) server. Results: A total of 20 differentially expressed genes including 3 upregulated genes (STAT1, FBXW17 and LRRC15), and 17 downregulated genes (Setbp1, Rxfp1, 5031414D18Rik, Dnm3os, Rxfp1, Serpine2, Rnase2a, Tnfaip8l3, Serpine2, Adap1, Nrg1, P2ry14, Vegfd, Aldh1a2, P2ry14, Fgfbp3 and Aldh1a2) were identified. The PPI network of the DEG identified a total of 40 nodes, 254 edges, 12.7 average node degree, and a PPI enrichment p-value of < 1.0e-16. The enriched KEGG pathway of the DEG includes; Relaxin signalling pathway, retinol metabolism, erbb signalling pathway, neuroactive ligand-receptor interaction, TNF signalling pathway, and focal adhesion. However, the enriched GO were r FGFR signalling pathway, cardiac endothelial cell differentiation, cardiac muscle cell myoblast differentiation, plasminogen activation, mast cell chemotaxis, endocardial cell differentiation, and transmembrane receptor protein tyrosine kinase. Conclusion: The present study may provide a basis for an improved understanding of trypanosome infection in humans. The DEGs identified in this study could be utilized as new biomarkers for prognosis and potential new targets for the development of new drugs against human trypanosomiasis.

The African trypanosomes responsible for sleeping sickness and nagana are cyclically transmitted by tsetse flies (Diptera: Glossinidae) [1]. The World Health Organization (WHO) estimate that there are approximately 50,000 deaths annually and a loss of 1,598,000 disability-adjusted life years (DALYs) caused by human African trypanosomiasis (HAT) with 60 million people at risk in 37 countries covering ∼40% of Africa (11 million km2) [2]. After a devastating epidemic in the early 20th century when a million people died of HAT, the disease nearly disappeared in the 1960s only to re-emerge strongly in the 1990s [3]. In addition, animal African trypanosomiasis or nagana has restricted agricultural development and human nutrition in sub-Saharan Africa and has a profound effect on the economy of much of the continent [4], as recognized by the African Union [5]. Despite the importance of these diseases, our understanding of tsetse/trypanosome interactions is still rudimentary [6].

Human African trypanosomiasis takes 2 forms, depending on the subspecies of the parasite involved: Trypanosoma brucei gambiense is found in 24 countries in west and central Africa [7]. This form currently accounts for 97% of reported cases of sleeping sickness and causes a chronic infection [8, 9]. A person can be infected for months or even years without major signs or symptoms of the disease. When more evident symptoms emerge, the patient is often already in an advanced disease stage where the central nervous system is affected [10].

Trypanosoma brucei rhodesiense is found in 13 countries in eastern and southern Africa. Nowadays, this form represents under 3% of reported cases and causes an acute infection [11]. First signs and symptoms are observed a few months or weeks after infection [12]. The disease develops rapidly and invades the central nervous system [13]. Another form of trypanosomiasis occurs mainly in Latin America. It is known as American trypanosomiasis or Chagas disease [14]. The causal organism belongs to a different Trypanosoma subgenus, is transmitted by a different vector and the disease characteristics are different than HAT [15].

High-throughput sequencing and microarray technology have been used to screen for differential gene expression in disease [16]. Gene sequencing technology can obtain the unknown genome sequence of individuals, and bioinformatics makes it possible to process this huge genome sequence information [17, 18].

In recent years, several studies have begun to use bioinformatics technology to search for biomarkers related to the incidence, diagnosis, and treatment of diseases from the genome sequence database of patients [19]. Although very few differential genes have been found to have therapeutic effects, bioinformatics methods also provide a new way for us to explore potential biomarkers of diseases [20, 21].

In this article, differentially expressed genes (DEGs) between trypanosome infected patient’s samples and normal samples were identified based on the data downloaded from Gene Expression Omnibus (GEO) database. Bioinformatics methods were used to construct a protein-protein interaction (PPI) network of DEGs. Meanwhile, function and pathway annotation of DEGs were performed based on Gene Ontology (GO) and Kyoto Encyclopedia of Genes and Genomes (KEGG) pathways databases. The present study hoped to provide a new view and evidence for the mechanism of trypanosome infection and identify new drug targets

2.2 Data preprocessing and identification of DEGs

The original expression datasets following background correction, normalization and probe summarization were converted into expression measures using the R Limma package The linear models for microarray data package in Bioconductor was used to identify DEGs according to the cut-off criteria: Adjusted P<0.00 and |log2 fold-change (FC)|>0.5 [22].

GO is a widely used method for the unification of biology which collected structured, defined and controlled vocabulary for a large scale of genes annotation. Kyoto Encyclopedia of Genes and Genomes (KEGG) database is a collection of online databases regarding gene functions, enzymatic pathways and associates genomic information with higher-order functional information. To understand the biological functions and cellular pathways of the DEGs, the present study explores the Enrichr server [23] to identify GO categories and KEGG pathways according to the protocol described in previous studies [24, 25]

2.4 Analysis of protein-protein interaction (PPI) network and sub-networks Search Tool for the Retrieval of Interacting Genes (STRING; string-db.org) is a precomputed global resource designed to evaluate PPI information. In the present study, the STRING online tool [26 ] was used to analyze the PPI of DEGs and experimentally validated interactions with a combined score >0.4 were selected as significant.

The application and development of computer technology and mathematics in the field of biology (bioinformatics) has become one of the most important tools in proteomics [27]. Bioinformatics tools are essential for converting raw proteomics data into relevant knowledge and subsequently into useful applications [28]. Furthermore, bioinformatics provides a method to convert datasets into biologically interpretable results and functional outcomes. Many studies have successfully combined data mining with bioinformatics technology [29]. Through the analysis of these data, various key genes and signalling pathways related to trypanosome infection and pathogenesis were identified, which has resulted in a better understanding of the occurrence and development mechanism of the disease.

These bioinformatics analyses have shed light on the progression and pathology of trypanosome infection at the molecular level. We hypothesized that proteins that had been repeatedly identified by GEO proteomics studies may serve as potential biomarkers. However, the present study relies on bioinformatics mining of clinical data from patients. Therefore, differentially expressed genes or proteins that were reported in the articles must be experimentally validated.

We also used bioinformatics tools to carry out a GO (Gene Ontology) and KEGG (Kyoto Encyclopedia of Genes and Genomes) pathways analysis of DEG to observe and analyze the changes in proteins and signalling pathways during trypanosome occurrence and pathology from a global perspective.

In conclusion, these hub genes identified in this study may have various roles in the occurrence, development, progression and severity of the trypanosomiasis, leading to damage of multiple systems in trypanosome infected patients. The present study may provide a basis for an improved understanding of trypanosome infection in humans. However, the current findings are limited by the lack of experimental verification in vivo and in vitro. Therefore, future experimental studies should be conducted to confirm the expression and function of the identified genes at the protein level, which may be an area of future research.
Funding

This research did not receive any specific grant from funding agencies in the public, commercial, or not-for profit sectors.

All authors contributed in preparing this article.

The authors declared no conflict of interest.

6.      Aksoy, S.; Gibson, W.C.; Lehane, M.J. Interactions between tsetse and trypanosomes with implications for the control of trypanosomiasis. 2003.