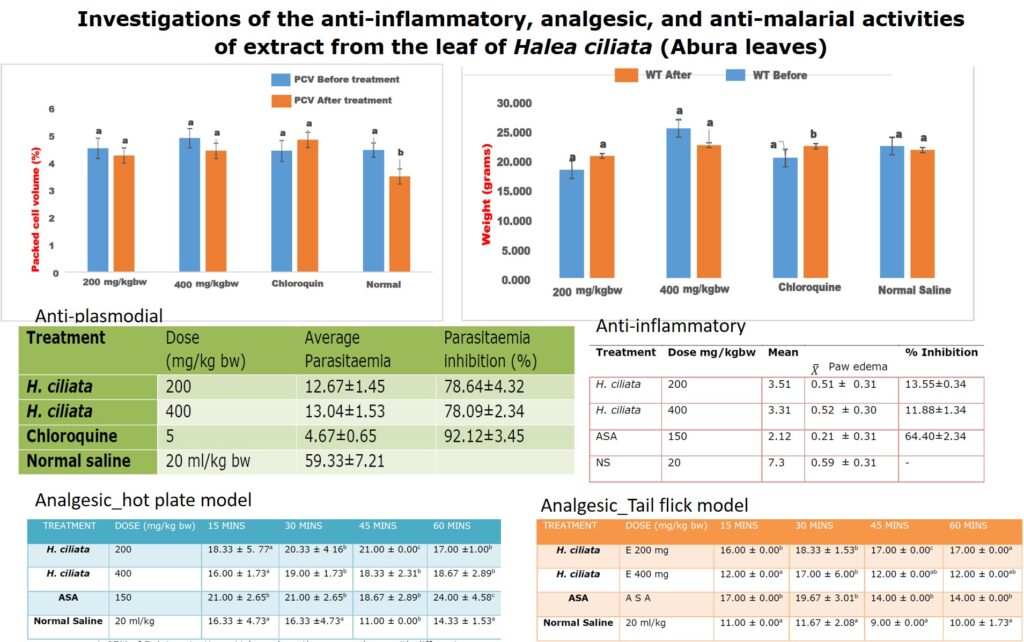 Investigations of the anti-inflammatory, analgesic, and anti-malarial activities of extract from the leaf of Halea ciliata (Abura leaves)

Background: Halea ciliata (Abura leaves) is a medicinal plant and has long been used for the treatment of several diseases including malaria, pains and inflammation, However, no complete pharmacological study to confirm these effects have been reported. In this study, the anti-inflammatory, analgesic, and antimalarial effects of Halea ciliata were investigated. Methods: The leaf of Halea ciliata was extracted with ethanol. The anti-inflammatory activity was tested using the egg albumin induced paw oedema while the analgesic activities were investigated using the hot-plate and Tail flick tests in mice. The anti-malaria activities were evaluated in Plasmodium berghei infected mice. Results: The crude methanol extract of Halea ciliata had LD50 greater than 5000 mg/kg and contains alkaloid, tannin, flavonoid, glycoside, steroid, terpenoid and saponin. In vivo analysis revealed that the crude extract demonstrated 78.64±4.32 % and 78.09±2.34% inhibition of the Plasmodium berghei parasite, while chloroquine, exhibited 92.12±3.45 % activities. The extract also significantly (p<0.05) suppressed the egg albumin induce paw oedema with percentage inhibition of 13.55±0.34, and 11.88±1.34 at 200 and 400 mg/kg respectively, while the standard drug caused 64.40±2.34 inhibition of paw oedema when compared to the non-treated controls. Similarly, the crude extract demonstrated significant analgesic activities in both the hot plate and tail-flick models. Conclusion: These results suggest that crude methanol extract of Halea ciliata has potent anti-malaria, anti-inflammatory and anti-nociceptive activities.

Malaria infection is a public health disease that, threatened the lives of one-third of the world’s population, particularly in Africa (88 %), Asia (10 %), and Central and South America (2 %) [1]. Children under 5 years old and pregnant women with potentially compromised immune systems are most vulnerable to malaria infection and dominated a larger proportion of malaria-related death worldwide [2].

Currently, there are about 214 million cases, one million deaths annually are due to malaria, most especially in children of Sub-Sahara Africa [3].

Inflammation is a complex biological response of vascular tissues to harmful stimuli such as pathogens, damaged cells or irritants [4,5]. In the absence of inflammation, wounds and infections would never heal and the progressive destruction of the tissues would compromise the survival of the organism [5,6]. Although it is a defence mechanism, loss of homeostatic control of this process has been implicated in the aetiology and progression of certain diseases including cancers and diabetes [6-8].

Pain refers to the subjective, unpleasant sensation that accompanies damage or near damage to tissues. Though it can also occur in the absence of such damage [5]. Chemicals released locally as a result of cell injury either produces pain by direct stimulation or by stimulation of nerve endings responsible for the mediation of pain [5,9].

Several steroidal and non-steroidal anti-inflammatory drugs (NSAIDs), and immuno-suppressant drugs have been developed for the management of pain and inflammatory conditions [10]. However, these drugs although proven effective, were often associated with severe adverse side effects on the gastrointestinal, cardiovascular, bronchus, and hepatic system, and have limited their use [5,11]. Thus, the search for new drugs alternative with little or no side effects has led to the current trend of research on medicines of plant origin [12].

Natural products particularly from plants have been used in healthcare for the treatment of several kinds of human diseases [13-15]. They are considered to be effective and produce least or no adverse effects in clinical trials when compared to conventional synthetic drugs [16,17]. Medicinal plants serve as a source of effective therapeutic agents which have been explored as a backbone for the development of some conventional drugs used in the clinics [18]. Several classes of bioactive phytochemicals including alkaloids, flavonoids and other natural compounds, have been implicated in the biological activities of medicinal plants [19].

Halea ciliata (Mitragyna ciliata Aubrev. Et Pellegr also known as Abura leaves are common among the Yoruba groups of Nigeria for wrapping Kola nuts [20]. It is commonly used in traditional medicine for the treatment of inflammation, headache, malaria hypertension, gonorrhoea, rheumatism, and broncho-pulmonary diseases [21]. Several classes of secondary metabolites produced by Halea ciliata are effective in the wound healing process and have anti-microbial properties [22]. This study focuses on the evaluation of the anti-malarial, anti-inflammatory and analgesic activities in different animal models of extract from the leaf of Halea ciliata

Swiss adult albino rats and mice were obtained from the animal house of the Federal Polytechnic Ile-Oluji. Ondo State, Nigeria. The animals were housed under standard laboratory conditions (Temperature 27 ± 2°C; 70% relative humidity; 12 h daylight/night cycle) and had free access to commercial feed pellets and water [12].  The animal study was approved and conducted in strict compliance with the principles governing the use of laboratory animals as laid out by the Federal Polytechnic Ile-Oluji. Ondo State Committee on Ethics for Medical and Scientific Research as contained in the Animal Care Guidelines and Protocol Review of National Institutes of Health Guide for the Care and Use of Laboratory Animals (NIH Publication No. 85-23, 1985).

The Plasmodium berghei NK65 chloroquine-sensitive strain was obtained from the National Institute of Pharmaceutical Research and Development (NIPRD) Abuja, Nigeria and maintained in the laboratory by serial passage in mice.

The acute oral toxicity of the crude methanol extract of Halea Ciliata was evaluated in albino rats using Lorke’s method [26], as reported by Muhammad et al. [27].

The anti-inflammatory activity was tested using the egg albumin induced paw oedema in rats [29]. Oedema was induced by the injection of 0.01 ml egg albumin into the sub-planter surface on the right hind paw 30 min after administering of the crude methanol extract of Halea Ciliata (200 and 400 mg/kg), acetylsalicylic acid (ASA) (150 mg/kg) and normal saline (20 ml/kg). The hind paw was monitored using a digital vernier calliper at 15 min intervals for a period of 1 h, and the percentage inhibition of oedema was calculated as described by Ndako et al. [12].

The crude methanol extract of Halea Ciliata was evaluated for its analgesic effects using the hot plate method. The experimental grouping was as described above. The rats were placed on a hot plate maintained at 55 °C within the restrainer as described by Menendez et al. [30]. The reaction time (time taken for the rats to react to the thermal pain by licking their paws or jumping) was recorded at 15 min intervals for 60 min as described by Ndako et al. [12].

All experiments were conducted with at least three replicates. Analyses were conducted using statistical package for social science (SPSS) version 16 and presented as means ± standard error of the mean. One-way analysis of variance (ANOVA) at p< 0.05 were used for comparing the significant differences between treatment groups.

3.1 Phytochemical compositions of the crude methanol extract of Halea Ciliata

3.2 Acute toxicity and LD50 of the crude methanol extract of Halea Ciliata

Though medicinal plants are widely accepted and used in the treatment of many diseases, their toxicity must not be ignored [36]. Studies have also linked the toxicity of various plants to the presence of phytochemicals [31,32,37]. It is, therefore, become relevant to access the safety of Halea ciliata. Acute toxicity is the adverse effects that occur within 24 hours of ingesting a single dose of substance[38]. The crude methanol extract of Halea Ciliata had LD50 greater than 5000 mg/kg BW in the acute oral toxicity test (Table 2). During the 24 h of extract administrations as well as the 2 weeks’ observation period, none of the rats exhibited weight loss and no deterioration in health or mortality were observed in rats treated with the crude extract up to the dose of 5000 mg/kg, indicating that the LD50 is greater than 5000 mg/kg in rats (Table 2).  Results of the present study suggested that the crude extract of Halea Ciliata exhibited a high degree of safety with LD50 greater than 5 kg/BW. Thus can be categorized as non-toxic extract (Class 5) in accordance with the guideline of the Organization for Economic Cooperation and Development (OCED) on acute oral toxicity testing based on LD50

The crude methanol extract of Halea Ciliata demonstrated significant anti-plasmodial activities by suppressing the multiplication of the Plasmodium berghei parasite in the infected mice in a dose-independent manner (Table 3). The crude extract demonstrated 78.64±4.32 % and 78.09±2.34% inhibition of the Plasmodium berghei parasite, while chloroquine, the standard drug demonstrated the highest suppression of the parasite replication (92.12±3.45 %) when compared with the extract-treated group (Table 3). Interestingly, the extract also prevented the parasite induces loss of packed cell volume (PCV, figure 1), and body weight gain (figure 2), when compared with the infected non, treated control (Table 6). Halea ciliata is a traditional herb, which has been used traditionally for the treatment of some inflammatory and infectious diseases in Africa [39]. Collectively this finding revealed that the crude methanol extract of Halea Ciliata suppress the replication of plasmodium berghei infection and prolonged the survival days of the animal. Hence could serve as a template for the development of novel anti-malaria therapy

3.4 Anti-inflammatory and analgesic activities of the crude methanol extract of Halea ciliata

The crude methanol extract of Halea ciliata demonstrated significant anti-inflammatory activities in egg albumin induced paw oedema (Table 4). The extract significantly (p<0.00) suppressed the egg albumin induce rat paw oedema in a dose-independent manner. The percentage inhibition of the paw oedema was 13.55±0.34, and 11.88±1.34 at 200 and 400 mg/kg respectively, while the standard drug caused 64.40±2.34 inhibition of paw oedema when compared to the non-treated controls.

In the egg albumin-induced paw oedema model, the anti-inflammatory activities of crude methanol extract of Halea ciliata were evident from 0 to 60 minutes of the treatment, indicating that both the extract is effective against the early and late stage of acute inflammation.  Flavonoids are well-known anti-oxidative agents, hence, the anti-inflammatory activity observed in this study could be attributed to the inhibition of PG synthesis, membrane stabilization, and antioxidant activities as they play key roles in countering the establishment of acute and chronic inflammation [40]. These observations provide support for the traditional use of Halea ciliata in the treatment of inflammation and infectious diseases.

The results provide scientific evidence that crude methanol extract of Halea ciliata has potent anti-malaria, anti-inflammatory and anti-nociceptive activities, and justify the traditional use of the plant for the management of inflammation and malaria and associated diseases.

Authors’ contributions: All authors participate in research design, data collections, analysis and writing of the manuscript. All authors read and approved the final manuscript.

2.         Crawley, J. Reducing the burden of anemia in infants and young children in malaria-endemic countries of Africa: from evidence to action. The American journal of tropical medicine and hygiene 2004, 71, 25-34.