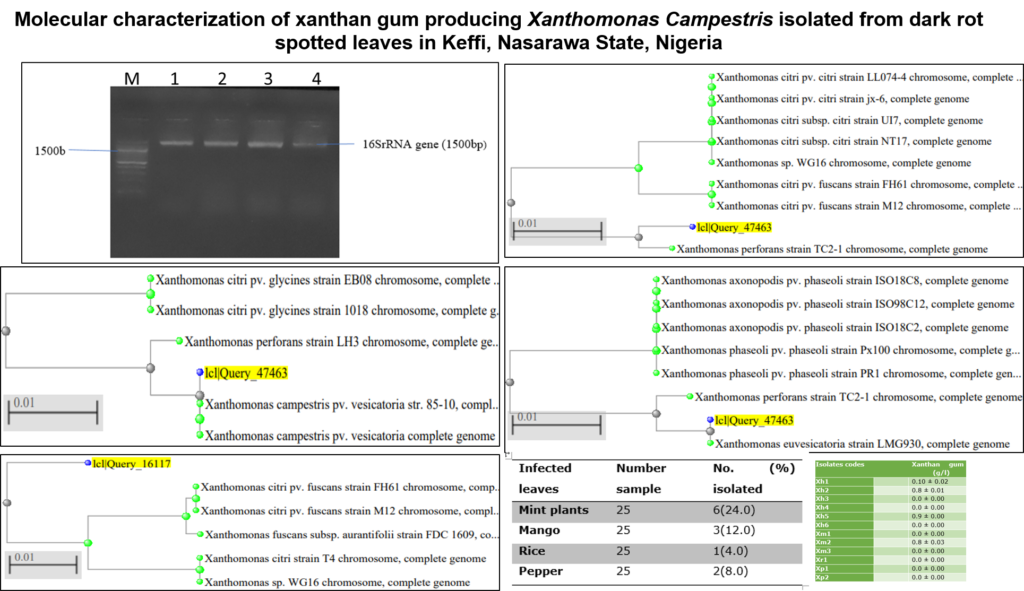 Background: Despite the wide application of Xanthan gum, its commercial production remains a global challenge. In recent years, considerable research has been carried out using agro-industrial wastes, which are renewable and abundantly available to produce value-added products. The present study was set out for molecular identification of Xanthomonas campestris from leaves of four different plants with indications of dark rot spots and evaluation of their xanthan gum production capacity. Methods: Twenty-five (25) samples of leaves from four different plants with indications of dark rot spots were collected from the study area and isolated for Xanthomonas campestris following standard microbiological methods. Cultural, morphological and biochemical tests were conducted to confirm the organism. Results: The results revealed that of the total 100 samples taken, 6 leaves (24%) were infected with Xanthomonas species in mint, 3(12%) were infected in mango, 1(4%) were infected in rice and 2(8%) were infected in pepper. Further molecular identification of the isolates was carried out to reveal Xanthomonas campestris pv. vesicatoria strain 85-10 and Xanthomonas perforans strain 91-118. These were further used for the production of xanthan gum using sugar cane molasses substrates extracted from sugar cane, which was used as fermentation medium for the production. Isolates from plants varying ability in Xanthan gum production, with the mint plant having the highest Xanthan gum production (0.10 ± 0.02 to 0.9 ± 0.00 g/l). Conclusion: The present study confirmed the high xanthan gum production capacity of Xanthomonas campestris from dark rot spots containing mint leaves and should be considered during local and industrial production of the xanthan gum

Xanthomonas campestris gram-negative bacteria, having a single polar flagellum [1], plant-associated bacteria that is generally pathogenic for plants belonging to the family Brassicaceae [2]. They cause huge problems in areas with a warm and wet climate [3]. Machinery and insects damage plants creating wound entry points for Xanthomonas bacteria [4]. The bacteria enter plant leaves through breathing pores (stomata) and water releasing pores (hydathodes) in the leaf surface. Once inside the plant, the bacteria reproduce and move around using the plant’s water transportation system (xylem) [5]. Xanthomonas bacteria feed on nutrients released from plant cells as they become leaky and start to die. They cause black rot disease where leaves become yellow and sticky, then wilt and die [5]. The bacteria are the causal agents of an assortment of persistent and periodic plant diseases [3], most strains are relatively common phytopathogenic bacteria which mainly infect crucifers and cause black rot which has high agronomic and economic importance-particularly in regions of subsistence agriculture and those with poor crop management resources [3]. X. campestris, is the most widely used for the industrial production of xanthan gum-based on its high yield and the high-quality product suitable for many applications [6]. It is strictly aerobic bacteria, and the rate of oxygen transmission affects xanthan gum production [7].

Xanthan gum is produced by Xanthomonas campestris [1,8. It derived its name from the strain of bacteria used during the fermentation process [9]. It has important physicochemical properties including high shear stability, pseudo-plastic features and stability on a wide variety of temperatures and pH values [10]. It’s already a widely used product in the market when compared to the other polysaccharides of plant and microbial origin and it has already been accepted by the US food and drug administration in 1969 and received European Union approval under the E-number 415 in 1980 [7]. Because of its unique rheological behaviour [11], it is one of the major microbial polysaccharides actually employed in many industrial processes [6]. It is tasteless and does not affect the taste of other food ingredients [12]

It has excellent solubility and stability under both acidic and alkaline conditions [13]. Despite its wide application, some problems in production persist [14].Commercially available xanthan is relatively expensive, since it is manufactured from glucose or sucrose [11]. In recent years, considerable research has been carried out using agro-industrial wastes, which are renewable and abundantly available to produce value-added products [5]. The present study was set out for molecular identification of Xanthomonas campestris from leaves of four different plants with indications of dark rot spot and evaluation their xanthan gum production capacity

2.1 Description of the study area

The leaf samples were cut into small pieces, soaked in 5 ml sterilized water of Yeast extract broth and was incubated for 24 hrs as described by Tatjana et al. [16], and Kassim, [13]. The resultant broth was streaked onto Yeast malt extract agar plate (3 g/l yeast extract, 3 g/l malt extract, 10 g/l glucose, 5 g/l peptone and 20 g/l agar) and the plates was incubated at 30°C for 48 hrs and examined. Isolated colonies were further streaked on Yeast Carbonate Dextrose Agar (YCDA) plates, and incubated at 30°C for 48 hrs. The bacteria with yellow mucoid colonies were selected for further analysis [13].

2.5 Cultural, morphological and biochemical characteristics Identification of the isolate

The colonies were purified on nutrient agar plates for observation, colonies were observed for pigmentation, size and shape as described by Ogolla and Neema [3].  Gram staining were used to study the morphological characteristics and gram reaction as described previously [17-20]. Various biochemical tests were performed for the identification of the isolates like, methyl red test, indole production test, urease test, citrate utilization test, starch hydrolysis, milk Proteolysis, gelatin liquefaction and tween 80-hydrolysis test [3].

Five milliliters of an overnight broth culture of the bacterial isolate in Luria Bertani (LB) broth were spun at 14000rpm for 3 min. The cells were re-suspended in 500µl of normal saline and heated at 950C for 20 min. The heated bacterial suspension was cooled on ice and spun for 3 min at 14000rpm. The supernatant containing the DNA was transferred to a 1.5ml microcentrifuge tube and stored at -20oC for other downstream reactions as earlier described by Abimiku et al., [21].

The extracted genomic DNA was quantified using the Nanodrop 1000 spectrophotometer. The software of the equipment was lunched by double clicking on the Nanodrop icon. The equipment was initialized with 2µl of sterile distilled water and blanked using normal saline. Two microliters of the extracted DNA were loaded onto the lower pedestal, the upper pedestal was brought down to contact the extracted DNA on the lower pedestal. The DNA concentration was measured by clicking on the “measure” button [21].

The 16s rRNA region of the rRNA genes of the isolates were amplified using the 27F: 5′-AGAGTTTGATCMTGGCTCAG-3′ and 1492R: 5′-CGGTTACCTTGTTACGACTT-3′ primers on ABI 9700 Applied Biosystems thermal cycler at a final volume of 25 microlitres for 35 cycles. The PCR mix included: the X2 Dream taq Master mix supplied by Inqaba, South Africa (Taq polymerase, DNTPs, MgCl), the primers at a concentration of 0.4M and the extracted DNA as template. The PCR conditions were as follows: Initial denaturation, 95°C for 5 minutes; denaturation, 95°C for 30 seconds; annealing, 52°C for 30 seconds; extension, 72ºC for 30 seconds for 35 cycles and final extension, 72°C for 5 minutes [22-23.

2.6.4 Agarose Gel Electrophoresis of the 16SrRNA gene from the bacteria isolates

The agarose gel electrophoretic separation of digested 16S rRNA gene was carried out as described by Abimiku et al., [21], 8µl of PCR products stained with ethidium bromide was loaded into 1.0% (wt/vol) agarose gel wells with a molecular marker run concurrently at 120 V for 30 min. The DNA bands were visualized and photographed under UV light 595nm.

Table 1: Cultural, morphological and biochemical identification of the isolates

The occurrence of Xanthomonas species is as given in Table 4.2. Where the highest occurrence was observed from mint plant (24%) followed by mango leave (12.0%), 4.0% for rice and 8.0% for pepper as shown in Table 2.

3.4 Molecular identification of the Xanthomonas species

The molecular identification of the bacterial isolates is shown in Figure 1. Agarose gel electrophoresis revealed different molecular of the Xanthomonas species isolates with base pair.

Conclusively,Xanthomonas species were isolated from plants leaves in Keffi and they were able to produce xanthan gum. The study confirmed high xanthan gum production capacity of Xanthomonas campestris from dark rot spot containing mint leaves and should be considered during local and industrial production of the xanthan gum.

Author’s contributions: All author participated in study design, methodology, data collection, and original draft writing and manuscript preparation. All authors read and approved the final version of the manuscript

Institutional Review Board Statement: Not Applicable.