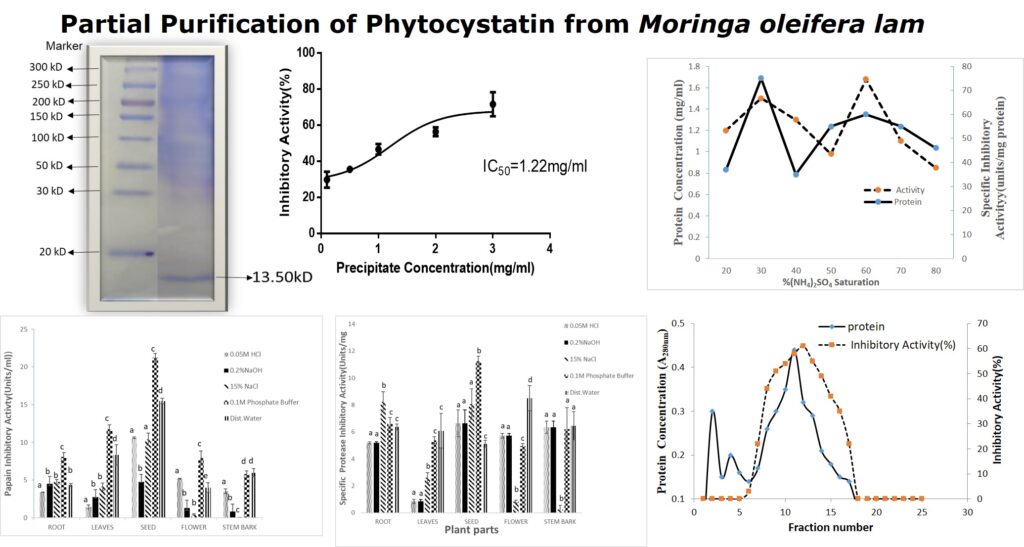 2.0 Materials and Methods
2.1 Chemicals
Benzoyl-DL-argininyl-p-nitroanilide (BapNA), Papain (EC 3.4.22.2 from Carica papaya (latex) Phenyl-Sepharose CL and all other chemicals are of analytical grade.

The plants were collected between the periods of November to January in Samaru, Zaria (Latitude 11.150N and Longitude 7.650E). The plants were identified in the Department of Biological Sciences, Ahmadu Bello University, Zaria, Kaduna State with voucher number 900219

Fresh parts (25g each); leaves, flowers, seeds, root and stem barks of Moringa oleifera. Each part was blended with 100 mL each of sodium chloride 15% (w/v), sodium hydroxide 0.2% (w/v), hydrochloric acid 0.05M, phosphate buffer 0.1 M (pH 7) and distilled water as described by Wu and Whitaker [10]. The clear supernatant obtained after homogenization and centrifugation (10,000 rpm, 15 min, 40 C) represent the crude extract and was assayed for protease inhibitor activity and protein content. The extract with the highest activity was used for further studies.

Different concentrations of protein precipitate (ranging from 0.1-3.0mg/ml) were incubated with 1mg/ml papain, prepared in 100mM phosphate buffer, pH 6.8, containing 0.3mM EDTA and 2 mM cysteine-HCl. The reaction was initiated with 200µL of 1.25mM BApNA solution for 1 hour at 370C. The reaction was terminated with 30% acetic acid10. The activity of the inhibitor was assayed as described below.

Protease inhibitor activity was assayed according to the method of Sritanyarat et al. [11]. Protease activity was assayed using   N-Benzoyl-DL-argininyl-p-nitroanilide (BapNA) as substrate.  Assays were performed by adding 290µL of 50mM Tris–HCl (pH 7.6) and 200µL of 1.25mM BApNA solution to the previously preincubated cysteine protease (1mg/ml papain prepared in 100mM phosphate buffer, pH 6.8, containing 0.3mM EDTA and 2 mM cysteine-HCl) with inhibitor extract   for 10min, at 250 C. After 30 min at 370C, the reaction was stopped by adding 150µL of acetic acid (30%). The resulting color was measured spectrophotometrically at 410nm. All assays were performed in triplicate. One unit of enzyme activity was defined as 1 µmol of p-nitroaniline (pNA) released per min from the hydrolysis of BApNA under the reaction conditions.  One unit of inhibitory activity corresponds to the amount of μmol of p-nitroaniline per mL per min that was inhibited.

Crude protein extract was precipitated at different percentages of ammonium sulphate saturation (10-80%). The precipitated proteins were separated by centrifugation at 10,000 rpm at 4°C for 20 min. Active protein pellets for each precipitation were dissolved in phosphate buffer and dialyzed against the buffer. The dialyzed sample was used for further purification.

This was carried out as described previously [14,15] to ascertain the level of purity and to determine the Molecular weight of the inhibitor using 15% separating gel and 4% stacking gel. Purified samples were mixed with sample buffer in the ratio of 1:1 (v/v) before heated at the temperature of 1000C for 5 minutes. The gels were stained with 0.25% Coomassie brilliant blue in 45% ethanol-10% acetic acid and destained with 5% ethanol-7.5% acetic acid. The molecular weight of the inhibitor was determined by comparing it to a standard protein molecular marker.

All Data obtained were expressed as Mean ± standard deviation. The results were analyzed statistically using one-way analysis of variance (ANOVA) followed by Duncan multiple tests. The level of significance was set at P < 0.05. Graph pad prism software was used to calculate IC50

3.1 Protein Concentrations in Different Solvents Extracts of Moringa oleifera Parts: All the solvents used were able to solubilize various amounts of proteins (between 0.06-3.03 mg/ml) from parts of plants. However, the leaf and seed of M. oleifera showed higher protein contents compared to other parts of the plants (Figure 1). The protein yield of cysteine protease inhibitor extracted from Moringa oleifera seeds is summarized in Table 1. Protein yield from cold acetone precipitation, (NH4)2SO4 precipitation, and Phenyl Sepharose chromatography is 29.32 %.

The results for inhibitory activity of the different parts of the plant extracts with papain enzyme (Figures 2) revealed that 0.1M phosphate buffer soluble protein extracts from seeds of M. oleifera possessed higher inhibitory activity of 22.43 and 21.23units/ml respectively. Sodium chloride (15%NaCl) was used for the extraction of the stem bark of M. oleifera (Figure 2). Similarly, the seeds of the M. oleifera phosphate buffer extracts showed a higher specific activity of 11.23 units/mg protein when compared to other parts of the plant (Figure 3).

Several parasites causing diseases are dependent on cysteine proteases for their life-cycle. The central role of cysteine proteases in the pathogenesis and survival of parasites in the host erythrocytes makes them attractive drug targets [2]. Inhibition of these proteases by natural proteins/peptides that will not have off-target binding could be useful in the treatment of these parasitic diseases [1,2]. Plants produce protease inhibitors to modulate the activity of self-proteases, but these molecules can also confer resistance to other exogenous proteases by pathogens and insect pest’s attacks. Consequently, taking advantage of plants that potentially inhibit this enzyme could be another source of antiparasitic agents.

In the present investigation, significantly higher specific cysteine protease inhibition was exhibited by phosphate buffer extract compared to other solvents, thus, phosphate buffer was selected as the effective extraction medium for maximal extraction of protease inhibitor without any loss in the activity. This is because reports on solubilization of therapeutic proteins using various solvent systems indicated that phosphate buffer extraction protects the protein structural integrity and conferred stability to these agents as these molecules are subjected to various forces aimed at isolating them for investigation [9]. Saline extract, which contains proteins from the latex of Moringa oleifera,was reported to have anticancer activities [16]. Other researchers used 0.01 N NaOH, distilled water [17] and 0.1 M phosphate buffer, pH 7.5 [9] as extraction media for various therapeutic proteins. Phosphate buffers at concentrations of 0.1-0.5 M are known for their solubilizing properties.

The crude phosphate buffer extracts from the seeds of Moringa oleifera was concentrated using cold acetone precipitation. The crude acetone protein precipitation exhibited dose dependent inhibitory activity with papain enzyme with an IC50 value of 1350 μg/ml Moringa oleifera. The maximum inhibitory activity was recorded at 50% and 60 % ammonium sulphate saturation. The ammonium sulphate solution is one of the commonest salt medium used in the initial steps in the protein purification. It has advantage over other solvents in stabilization of protein of interest. A 20-90 % ammonium sulphate saturation for Solanum aculeatissimum protease inhibitor was reported [17]. The low purification fold observed for Moringa oleifera seeds may be attributed to presence of activated protease enzyme or to some impurities interfering in this stage of purification, or it could also be due to stability factor.

Further purification of both inhibitors by Phenyl Sepharose chromatography yielded several proteins fractions with a purification fold of 42.3%. Phenyl-Sepharose as an adsorbent for hydrophobic interaction chromatography has been reported to be effective for the purification of some proteases, and with purification factors in the range of 2.9 – 60 and activity yields more than 88% were obtained [13]. The increase in activity in this investigation is indicative of exclusions of endogenous protease and improved stability of the inhibitors.

The seeds from the Moringa oleifera can be considered as an excellent source of isolating low molecular weight phytocystatin with in-vitro inhibitory activity against commercial cysteine protease. The isolated protein in this work could be useful in the biotechnology of traditional medicinal plants, in transgenic crops to arrest the negative pathogenic over expressions of cysteine proteases. Further research on the characterization of this molecule is ongoing.

Funding: This research did not receive any specific grant from funding agencies in the public, commercial, or private sectors.

Author’s contributions: All authors contributed to the article.

Acknowledgements: The authors appreciate the technical staff of the Department of Biochemistry, Ahmadu Bello University Zaria, Nigeria, for their kind assistance throughout the conduction of this study.